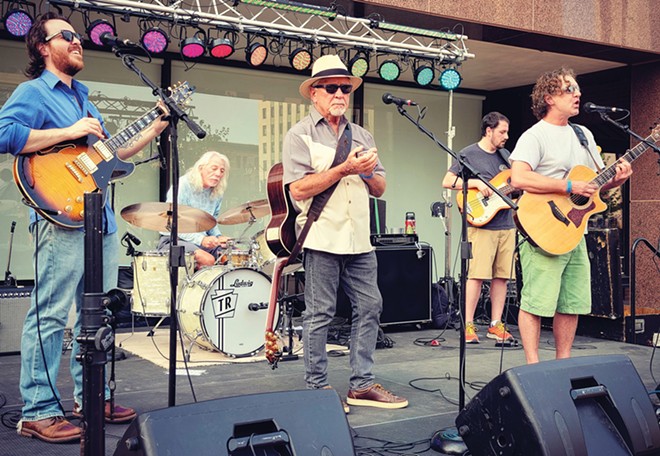 Positively 4th Street plays the Positively Summer Music Festival this Saturday at Sheedy Shores Winegarden near Loami along with several other acts.

Looks like we have another bang-up weekend chock-full of live music entertainment for your listening pleasure. How 'bout we wonder as we wander about and see what's out there?

Let's venture from the bars and go visit our very own Springfield Municipal Band. Founded in 1936 through a city referendum and overseen by the Municipal Band Commission and the mayor of Springfield, this volunteer group has around 80 alternating musicians who play on various nights. Directed by Tom Philbrick since the end of the 2011 season after many years of leadership from Gene Haas, 2021 marks the 85th year for the band to continue "providing free music in the park for city residents and visitors," and that's pretty fantastic. Bring your own seating device or get there in time to find a park bench and catch the music in the air at Duncan Park (formerly Douglas Park) in the bandshell on Tuesdays at 7:30 p.m. and Sundays at 7 p.m. through Aug. 10 (Aug. 8 and 10 were added as rain dates from the original schedule). Visit the SMB's Facebook page or the city of Springfield's website for more information and updates.

Along the lines of other bands not normally associated with bar venues, the 33rd Volunteer Regiment Band plays this week's Party on the Plaza on the east side of the Old State Capitol, Saturday from 5-7 p.m. (and repeats on Aug. 7) as part of the History Comes Alive program that's making some cool things happen around town. The VRB started in 1996 as an "authentic re-creation of the actual Civil War-era band that was mustered at State Normal University in 1861," and they are still at it and going strong. The central Illinois volunteers, as much as possible, strive to wear uniforms and play instruments representative of the historic era, while often giving programs on the evolution of brass horns. Sounds like a fun time of education and entertainment, which is always a good deal when you can get it.

Get on board for the newest music gathering in the area when Sheedy Shores Winegarden near Loami hosts the Positively Summer Music Festival this Saturday from 2-8 p.m.. Performing artists include Buckhart Road at 2, Chickadee Sermon at 3, Positively 4th Street at 4 and Jay & Kimberly at 5, then P4S returns at 6:15 to close out the show. The music is free to you and the entire world, plus the place is a beautifully bucolic setting, so let's get out to the country and carry on with some partyin' on, positively for sure.

Ethan Stephenson heads up from his southern Illinois home to play the West of Wise Winery near Petersburg on Saturday evening (6-8) and the Edgar Lee Masters home in Petersburg on Sunday afternoon (1:30-3). Ethan, a wonderfully literate and passionate singer, songwriter and musician, is taking a position this fall at the University of Alabama as a professor of English, so come listen to his fascinating and powerful songs before he heads south and wish him well on his latest endeavor.

Be sure to take a gander at our music listings for a full rundown of all the goings on going on this weekend and during next week's days and nights. Then get yourself ready for the next big event when the Downhome Music Festival happens July 30 and 31, downtown on Seventh Street between Adams and Washington streets, featuring many of Springfield's all-original music bands. And remember that the Illinois State Fair is headed our way soon, too.

Let's be careful and stay safe, while keeping the music moving along.