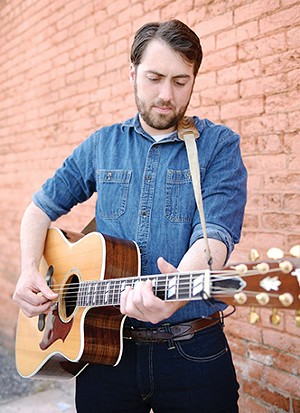 Ethan Taylor Stephenson plays the West of Wise Winery near Petersburg this Saturday afternoon from 2 to 5.

Things just keep getting weirder as they also seem to be simultaneously sliding back to what once was normal. In the meantime, music-making helps to keep the strange times in check somewhat by hitting the mark for helpful healing and familiar fun as we do the best we can do.

First, let's remember those frontline workers out there battling COVID-19 each and every day and also give our hearts out to everyone and anyone dealing directly with actual cases of the virus. And as our counts go up here in central Illinois, let's continue to be vigilant in watching out for each other to protect all of us from making matters worse. Now onto the music being made for the good of all. May you enjoy it with the necessary precautions.

Thanks to our friend, Doug Kamholz, for sending me info on the July 19 passing of visionary singer-songwriter Emitt Rhodes. An incredible artist I was not aware of in the least, he was actually born in Decatur in 1950 and after relocating to Southern California, produced a groundbreaking album in 1970 that received national recognition. Afterwards, things didn't pan out professionally for the brilliant songwriter who received critical accolades and even a comparison to Paul McCartney. In 2016, musicians who were aware of Rhodes' history and talent helped him make one last album after some 40 years of record silence. It's great music from someone few know about and with a central Illinois connection, it's even more fascinating for us. In 2016 Emitt said these beautiful words about songwriting, "I'm just gonna write what my heart tells me, because that's the only thing that really matters, isn't it?." Please look him up online for a real musical treat.

Let's keep on watch for online events happening this weekend including The Deep Hollow going nationwide on the Levitt AMP Virtual Music Series at 7 p.m. on Friday, July 24. It's all happening at levittamp.org/virtual with plenty of archived shows, plus more live streams to come. We can also take this time to congratulate Micah Walk of TDH in successfully funding his Kickstarter campaign and look forward to the new MW solo album sometime next year.

On Saturday at 8:30 p.m., you can experience country superstar Blake Shelton with Gwen Stefani and Trace Adkins in a concert filmed just to be shown "at drive-in theaters across North America," including our very own Route 66 Twin Drive-In near Knight's Action Park. Sponsored by Encore Drive In Nights, it's easy to find the tickets online.

In real time, in-person happenings, there's lots going on all over and mostly outside, which is a good place to be for listening to live music during a pandemic. Ethan Taylor Stephenson, a brilliant and profound singer-songwriter originally from Petersburg, returns to his home turf for a performance at West of Wise Winery from 2 to 5 on Saturday afternoon. Ethan recently received his PhD in English literature from SIU-Carbondale, which is fantastic in my book, and as he applies at colleges for work, we get to hear him play awesome original songs and some cool covers.

Downtown Springfield can rejoice in a restaurant not closing, but actually celebrating an opening anniversary, as our pals at Tacology 101 do it up right for year number three. The party on Saturday night from 6 to 9 features the musical debut of Colin Helton and The Southern Jumbo Deluxe, with Colin at the helm, along with fellow musicians J.R. Reeves, Blake Martin, and Bill Steele making up the SJD.

Be cool, stay cool and watch yourselves while having fun hearing the music.