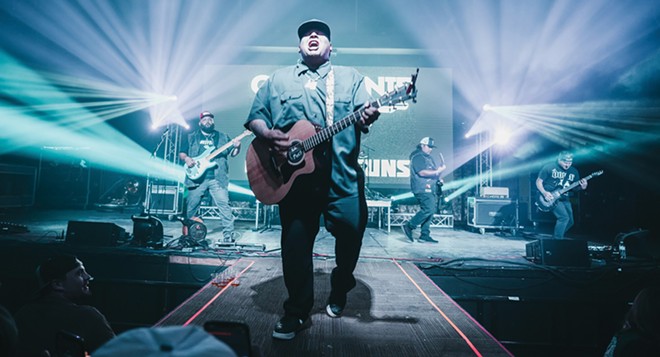 As we go on meandering through the winter of 2022, with COVID maybe on the side of waning (again), the Super Bowl out of the way (with more talk about the halftime show than the game) and a blast of cold weather on the way, allow me to possibly brighten your day with the possibilities of wonderful music being made and played all over town this weekend.

Once again, and I am not kidding, because the live music listings do not lie — even though once in a while they are incorrect — I find that the diversity and depth of entertainment happening around town is simply amazing. Just on Friday night alone there's jazz, blues, touring country, local country, soul-funk, folk and pop, plus even a classical music concert and good old karaoke. Saturday is not as diverse in genres, but most certainly includes more music in general, and Sunday is still going strong with plenty of afternoon and evening shows available at various venues.

Those Friday jazz groups are the Frank Parker Quartet at Boone's (5:30-7:30 p.m.) and The House Trio at George Ranks (8-11 p.m.). Frank, a New Orleans native and Springfield stalwart, brings us a little early Mardi Gras celebration with his Crescent City-tinged sound and always brings it all back home.

The House Trio features Jose Gobbo on guitar, songwriting and music direction, with Ben Taylor on bass and Nikola Djokic on drums. Visit Jose's website (www.josegobbomusic.com) for more dates, where to buy tunes and lots of other good news. You will dig these guys and their cool tunes, because they're just fantastic. They did 52 weeks (that's a whole year, by the way, in case you're not counting) of live YouTube shows (look them up) that led to 10 original Jose compositions on a new release called Live from Home, available on most streaming platforms.

Jose, officially known as Dr. Jose Gobbo Jr, is originally from Brazil, then he studied in Iowa, taught at several schools and now teaches at UIS. He also plays with a couple of groups beside the House Trio, including the Brad Wheeler Quartet and the Chip Stephens Organ Trio and, as might be expected, can be seen around town wherever the jazz arises.

You know how I love to play music, and it's an extra-sweet treat when the boys are back in town, so expect some fun from me, Owen, John and Sam as Irwin & Sons take the stage at Harvest Market Farmhouse Brews (6-9 p.m.) on Friday. It's almost an Irwinites reunion, but not quite.

For more Friday stuff, Giovannie & The Hired Guns from Stephenville, Texas, come to town to "deliver a high-octane collision of rock-and-roll and country that inspires just as much head banging as it does two-stepping," as described by their publicist. They've got a couple bonafide hits on YouTube for you to take a gander at before heading out for a listen at Boondocks to see if you agree.

You can't beat the selection, but it will be tough to decide where to go when Friday continues as Kapital Sound grooves the Curve Inn, Lick Creek takes on Motorheads, Jameson Freeway drives into the Blue Grouch, David Lumsden Blues Band gets bluesy at Anchors Away, West End Boogie Project hits the Northenders VFW and Gabe Marshall countrifies Whiskey Jack's.

See what I mean? That's just what's listed on Friday night, and there are always a few more things out there that somehow slipped through the calendar cracks.

Take care, be safe and next week there will be more music, I promise.