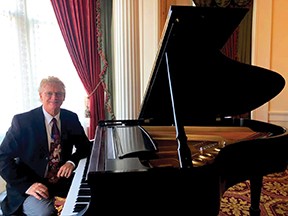 Ed Clark plays songs on his piano, streaming nearly nightly around 7:30 p.m. on Facebook Live.
Onward we go into the bizarre world of a global pandemic with empathy and compassion for those most closely affected by a direct connection to COVID-19, plus thoughtfulness and care for the rest of us, however touched by this worldwide concern.

In this column about live music, we can rest assured that musicians playing in public with audiences participating will be a thing again, but while we wait, virtual performances do help to ease the pain and fill the void. I think we can safely say that by giving credence to the belief that music heals, we're in good company. So with that, let's take a looksee to see what folks in our community are doing to use this power for good through the expression of music.

Ed Clark, a local professional pianist and photographer, began Facebook Live streaming from his Ed Clark Music Services page on April 8 and has done one nearly every evening since. He starts around 7 or 7:30 and does shows outside in his yard when weather permits. We've been talking this week, commiserating about lost gigs as working musicians, figuring out how to get a virtual tip jar going and other practicalities of making music during these times. I asked Ed why he started his live streaming, which now has thousands of views, and he said he wanted to give back to the community and do whatever he could to help people feel better in isolation. Like Ed, as I am finding out by asking other musicians (including musing myself), there's quite a bit of just wanting and needing to play music for others, as well as for ourselves, that drives the desire to make music for however folks can experience the sounds. And, of course, it's gobs of fun playing any old way.

The Springfield Uketopians, a group of dedicated ukulele players and fun-loving musicians, got creative when they had to end their normal monthly jams held at Joe Gallina's Pizza. Through a Virtual Jam project organized and produced by SU member Mark Suszko, participants each recorded the same song from home by playing along with an original take, then Mark put all the separate versions together with video and sound for a very cool and completely neat song explosion. The first collaboration project used the Hank Williams classic, Jambalaya, and the second song recorded was the international hit, Don't Worry, Be Happy, originally written and recorded by former Springfield resident Bobby McFerrin. The second project integrated two guest performers into the video, hometown-hero saxophonist Frank Trompeter and nationally known ukulele teacher and performer Stu Fuchs, as well as featuring several local uke-sters and other players from four states around the country. By looking up Springfield Uketopians Virtual Jam you can see it on Facebook or YouTube. We're looking forward to more of these fun and rewarding spots, and I can tell the participants are too.

Macomb-based singer, songwriter and folk musician Chris Vallillo, known for his song plays on Abraham Lincoln and the civil rights movement, plus 30-some years of performances across the country, a bunch of wonderful records, as well as being the producer of Music at the Museum at the Illinois State Museum and Hickory Ridge Concerts at the Dickson Mounds State Museum, (whew, that's only his highlights!), goes on Facebook Live this Friday at 7 p.m. for a concert performance. Chris will be doing a "whatever I feel like" concert covering "originals and instrumentals with a few songs from my favorite writers" and says he will also take requests.

Enjoy the good of music any way you can and see you next week.