Music from Marty, Honey and EDA 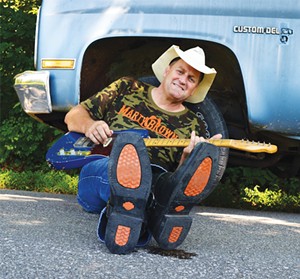 Here comes some April fun, with famous folks, new venues, regular places, familiar faces and lots more happening this week in the Springfield music scene. Sit back and read up on it, then be sure to get out and take it all in as the weather warms and the action grows.

Here's a heads up to all you real country music fans as Jeb Brown, out at the Backroom Lounge in Riverton, hits one out of the park with a Friday night concert by longtime performer Marty Brown. The Kentucky native first stepped out during the early 90s with three critically acclaimed albums on MCA and another on High Tone, all known for their "neo-traditionalist" sounds. During that time, he toured with the likes of George Jones, Garth Brooks, Hank Williams Jr. and Brooks & Dunn, but never broke through with any major hits of his own. He did co-write several zingers for others, including Tracy Byrd's "I'm from the Country" and Brooks & Dunn's "It Ain't Me, If It Ain't You" that established Marty as a verified professional Nashville songwriter. Then in 2013, for season eight of America's Got Talent, he reached the semi-final round doing a version of Bob Dylan's "Make You Feel My Love" which, after his audition tape went viral, led to a single release of his take on the Dylan classic. Always on the move, in 2019 Brown released American Highway, his first full album in some 25 years with the latest single "I'm a Country Boy" available on all digital platforms. In a lifetime achievement award, this coming October he will be inducted into the Kentucky Music Hall of Fame. Yessiree, that's quite a career that's still going strong, showing just how much can be done by one guy with a guitar playing music from the heart. Tickets and info are at www.backroomlounge.com where you can also see all the BRL's upcoming shows.

Joel Honey is up for the most gigging musician in town lately, and that's a good thing for all concerned. He does good songs well on guitar and vocals with the proof in the pudding being he's playing all the time. This week, I spy "Joel Honey Jams" at a couple different spots, including the Hickory River Smokehouse on Thursday and on Friday at the Capitol City Brewing & Supply on South Sixth in Southern View as the city's latest brewery (I think that's right, unless one opened between writing this and publication!) presents its first music show. Joel also co-hosts regular open mics with Silas Tockey at Whiskey Jack's on Mondays and Boone's on Saturdays, along with one on his own this Thursday at Buzz Bomb. And he plays everywhere else all the time, so get out and say hey to Mr. Honey when you can.

In another new venue opening, the Broadgauge restaurant in Petersburg hosts acclaimed singer-songwriter Edward David Anderson in their upstairs ballroom on Saturday night. Anderson first hit with his American rock band Backyard Tire Fire, then went on to a solo career that established him as an esteemed performer in the Midwest and around the country with music in "regular rotation on radio stations across the globe for two decades." EDA calls his style of playing "black dirt music," as in "roots music, cultivated in the fertile soil of the Midwest." Catch his concert at the beautifully revived Broadgauge space in a listening room format.

Be sure to look at all the other cool happenings going on in our music listings, because you know there's lots more out there than I wrote about here.