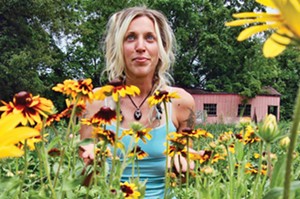 The Ides of January are upon us, as the weather finally decided to act like a Midwest winter. Methinks many a Springfieldian is prepared to come out of the warm and protected cave to see live music after a slight thaw this weekend.

For those of you in the know about Greg Brown, Iowa’s treasure of a folksinger appearing at UIS in the Studio Theatre on Jan. 22, you should be aware that Bo Ramsey, Brown’s longtime partner in music, is scheduled to play along with his old buddy. As Greg is with words and melody, Bo is on slide guitar and musicianship, making them a spectacular team. See you there.

Things warm up at the Curve Inn with an Americana music night on Thursday from 6 to 10 p.m. I’m proud to be a part of this event which brings original music to Ric Major’s cool stage area featuring Josie Lowder (yes, she’s back), The Deep Hollow and then me with a version of the Raouligans for a night of locals making self-penned (mostly) music. Also on tap at The Curve is a grooving band of youthful lads by the name of Young Luck on Friday, and an extremely talented and experienced duo of elder statesmen, Rogers and Nienhaus, on Saturday.

How about a visit on Saturday to that long-lost, terrific Springfield downtown venue called Charlie’s Club? Once a regular spot in live music rotations, the very cool space below Andiamo (go through the cafe to get downstairs to Charlie’s) comes alive this weekend with an interesting mix of music and comedy. Engineered and mostly operated by the Steinhauer family, this event brings together three separate-but-connected acts that I will attempt to explain as follows.

Erin Darnell Steinhauer sings with her father-in-law, Mike Steinhauer, accompanying on the squareneck resonator guitar (a Dobro-style to some of you) for the opening salvo. Then Square of the Roots, featuring Erin’s husband and Mike’s son Brian Steinhauer, on vocals, guitar, mandolin and boxerine, along with Mr. Rev. Mike still on the resonator, joined by bassist Ryan Pulver and Steve Correll on various drums and percussion. Now if you followed all that (not really so complicated, I’m just trying to be silly), then following all that is our friend and companion, he of the rapid and rapacious wit, Blake Stevens. I’ve known Blake a long time as a brilliant songwriter and blooming novelist. Now we get to experience him as a standup comedian after the music acts are done. I do believe the Steinhauers and others out there have known Blake Stevens (Stevens Blake would be a good pen name) much longer than I, in many more capacities than as an artist-at-work. The show begins at 7:30 p.m., and costs $4 to see. Better get there early, folks, as the seating is limited in the cool club.

As I peruse the Pub Crawl, it’s hard to not feel very sad seeing acts listed for Julia’s Kitchen and knowing the restaurant and venue is closed. While all devotees of Julia’s will deeply miss the great food and neat atmosphere, us working acoustic musicians will surely mourn the loss of a good place to play, founded on respect and consistency. I dare to surmise what ghosts of music past haunt the halls of the Vinegar Hill Mall searching for some place to land and understand why so many active music venues come and go in this space. Thanks to Julia and her staff for all the good support you gave me and many other musicians in the area. We miss you already, for sure and always.

Have fun and see you next week.