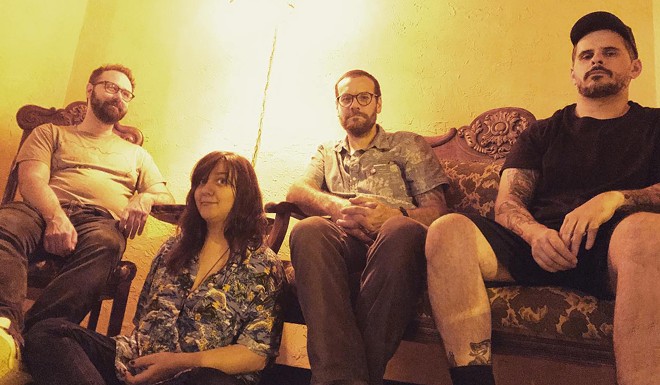 Attic Salt joins Local Drags and NIL8 for a show on Saturday night at Anvil & Forge Distillery and Brewery.


It's the weekend before Christmas and all through the town, lots of creatures were stirring and moving around. Why, heck yeah, they were! The city was hopping with all these folks going out to see the barrage of live music happening all over the place.

First we have a call out for volunteers to help with our First Night Springfield held downtown on New Year's Eve and hosted by the Springfield Area Arts Council. You can expect boatloads of fun along with some work, plus you get to be a part of this fantastic event now in its 33rd year of existence. In a new addition to the evening, the dining room area on the lower level of the Hoogland will host "an all-inclusive space" from 5 to 7 p.m. for children and teens to display art projects or perform musical acts in this family-friendly location for people of all abilities. To volunteer to help or to use the art space, just contact the Arts Council at (217) 753-3519 or programs@springfieldartsco.org to let them know what's up.

Micky Shomidie, a longtime local musician who's been around the world and back a time or two on the music train, is taking treatments over the next few months for stage three cancer of his tonsils. It's serious stuff, but he's going to whoop it, so go to Micky's Medical Fundraiser on Facebook and kick in a few bucks to help get him through the down time.


Astrofix, an original area rock band, fronted by singer and songwriter Jamie Meredith, decided to go the crowdfunding route to make their sophomore album and chose Kickstarter, which comes highly recommended by me and thousands of others who have successfully used the concept to raise funds. Please go to Kickstarter.com and look up Astrofix, then pledge what you can for the rewards offered. Congratulations to Astrofix and good luck on reaching your goal, completing the album and sending out the goods.

On Friday night, slide into Third Base to visit an old friend you may not have heard from in a while, as Lincoln native and blues man extraordinaire Greg Glick slips back into town. Featuring Greg's longtime musical cohort Greg Deener on bass and vocals, along with Judd Short on drums and vocals, the band is back for a night of rocking blues and blues rocking.


Let's jump on into Saturday, when in the holiday spirit, Mike Reid and folks from the House of Music host a "Jam at the House" from 3 to 7 p.m. at the venerable music store on Third and North Grand. There'll be a house drum kit and a variety of instruments, plus a back line and sound system for musicians to use and of course, all are welcome to bring along personal instruments as well to join in the jamming good time.


Jimmy Riemer is back in town during his winter college break with solo shows at The Office on Thursday and Papa Frank's on Friday. Kobanova, Jimmy's band down in Athens, Georgia, just released a very cool sounding single on Apple Music called "Far From Home." The song was recorded at John Keane Studios, home base of the famed producer known for his award-winning work with REM, Indigo Girls and Widespread Panic, among many others.


Well, folks, have a pleasant Christmas and let's get ready for the next year.

What’s going on in your virtual world?