Movies to watch at home 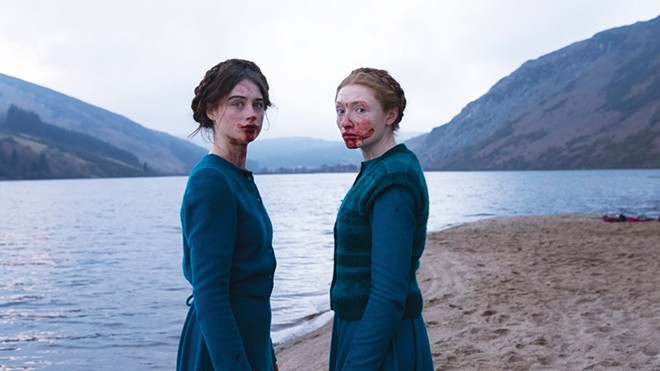 Now that movie watching has become a home-viewing option for the time being, this space will be devoted to small reviews of films that can be seen on various streaming services, cable channels and video-on-demand. Stay safe and happy viewing!

A girl (Raffey Cassidy) born into an all-female cult led by a man (Michiel Huisman) in their compound begins to question his teachings and her own reality. Gorgeously shot by Polish director Malgorzata Szumowska, this timely and vital cautionary tale of abuse and the dangers of blind allegiance suffers from a tepid pace and sense of pretentiousness that proves fatal. Solid performances and an initially intriguing story serve as an effective hook but the filmmaker's penchant for repetition prevents the film from ever building any momentum, the end result being a well-intentioned, good looking bore that pushes the viewers' patience past the breaking point.

While trying to make his sister's wedding day go smoothly, Jack (Sam Claflin) finds himself juggling an angry ex-girlfriend (Freida Pinto), an uninvited guest with a secret (Jack Farthing), a misplaced sleep sedative and the girl that got away (Olivia Munn) in alternate versions of the same day. An exhausting, irritating rom com that strives to be as witty as Four Weddings and a Funeral and fails at every turn. Everyone is guilty of trying too hard, as manic performances are the order of the day, while the only thing the film succeeds at is making you appreciate how good Hugh Grant is in similar vehicles.

In this poignant multi-generational drama, Pin-Jui (Hong-Chi Lee) is a free-spirited yet impoverished young Taiwanese factory worker, who makes the difficult decision to leave his homeland - and the woman he loves - behind in order to seek better opportunities in America. But years of monotonous work and an arranged marriage devoid of love or compassion leave an older Pin-Jui (Tzi Ma) so he must reconnect with his past in order to finally build the life he once dreamed of having. Genuinely moving, this quiet drama slowly gets under the viewer's skin as we come to sympathize with Pin-Jui's plight and come to relate to his feelings of alienation and regret. Quiet, poignant and effective.

Trying to put her life back together after the death of her husband, Libby (Leslie Bibb) and her children move to her estranged aunt's goat farm in central Texas where they meet a rugged handyman (Josh Duhamel). You can see exactly where this is going but the journey to the couple's final embrace contains enough genuinely poignant moments to make it worthwhile. Bibb is very good, making Libby's pain palpable without ever forcing it, her innate charm emerging over the course of the film as her character learns to love again. She's likable, never cloying, sympathetic and real. Duhamel brings much of the same to his character, his easy-going persona put to good use here.

A pair of teenage girls (Sidney Flanigan and Talia Ryder) in rural Pennsylvania travel to New York City to seek out an abortion after an unintended pregnancy. Flanigan's performance is exceptional as she's required to reveal a great deal by doing very little and garners our sympathy from the start. Writer/director Eliza Hittman's intent is not to come down on one side or another where the abortion issue is concerned, though I suspect supporters on each side of the debate will find elements in the film to support their beliefs. Never isn't concerned about impersonal rhetoric – its intent is to remind the viewer of those caught in the middle of the political divide, those who have no say in how the law may affect their lives and those who know firsthand that this is not a black-and-white issue, but one filled with grey areas for which there are no easy answers.