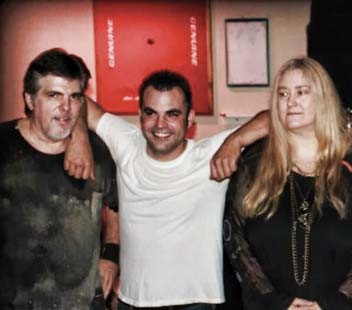 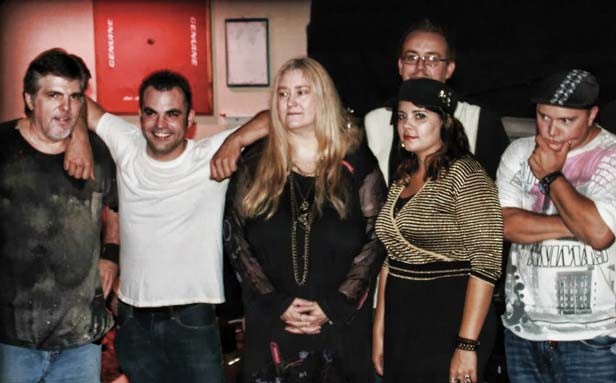 First, let me thank Dan Usherwood of the Pleasant Plains Historical Society and all who helped make our first Clayville Folk Festival in 25 years a good beginning for many fests to come. Other than the chilly weather making viewing and performing a veritable challenge, the fest was a huge success.

In a twist of fate not possible without that constant northwest wind and mid-40s temperature, we moved the last acts, Gloria Attoun (Augusta, Mo.) and Chico Schwall (Eugene, Ore.) inside the nearby log cabin. There we played acoustic music on fiddles, banjos, guitars and flutes with a fireplace blazing, kerosene lamps lit and smiling faces shining in the flickering firelight, much like things were done back during the working days of the Broadwell Tavern at Clayville in the mid-1800s. We have wonderful video and photos on Facebook thanks to Pete Neff, plus Rhyno Ranch broadcasted live on the Internet all day. You can visit his archives at www.southernfryedradio.com to see all performances except the inside show. That one, in keeping with the spirit of the moment, is for the ages.

I had an inspired talk with Shane Turnage of the Celtic Mist late last Thursday night about how to help downtown Springfield sparkle with laughter, love and live music. The avid attendee of concerts, wherever good music can be had (ask him about those Phish shows sometime), truly believes in setting the table well and putting on a party.

This weekend comes the debut of Roktoberfest. Sponsored in cooperation with several downtown bars, it’s the latest and greatest downtown street party, inspired by Shane’s determination to offer Springfield many opportunities to have fun with live music, food and beer. This event, set to be the last outdoor downtown party of 2012 (excluding the holiday season stuff, but I put them in a different category), starts at 2 p.m. with Murder of Crowes, then a real live German oompah band Die Musikmeisters (sounds official) toots at 4 p.m., a Miss Roktoberfest contest (kind of cold for a bikini contest) happens at 7 p.m., then The Notorious Nightcrawlers and Captain Geech and the Shrimp Shack Shooters play on until midnight. The food and drink features German favorites like sausages and pretzels and Oktoberfests and Rieslings, plus costumes are appropriate and encouraged. Ach du lieber, Shane is wearing lederhosen! Viel vergnygen.

In the other fine fest for the weekend, the venerable Indian Summer Festival goes on at the wonderful Lincoln Memorial Garden, Saturday and Sunday. Remember to be careful driving and parking. They do a great job of handling the traffic and large crowds, but the detour and road signs can be a shock if you go flying down West Lake Drive such as so many folks do. Also, remember the entertainment is on the other side of the road from the main garden area. The good folks at LMG built an actual covered stage in a gorgeous setting that we performers appreciate more than anyone will ever know. It’s a great event with plenty of good music, crafts, art, food and kids’ activities to boot. It just feels good walking around, soaking all the goodness in.

At 7 p.m. on Saturday night in Rochester at the Walnut Street Winery check out the sounds of Red, White and Floyd, a St. Louis group supplying a “note-for-note and sound-for-sound reincarnation” of the legendary British group Pink Floyd. Claiming to be the “most dangerous Pink Floyd experience,” the group runs through versions of all the popular songs, plus the entire Dark Side of the Moon album, including the music and stage show. You are going to “wish you were here!”

Off we go into the wild autumn yonder.