Minute perception and the cosmic 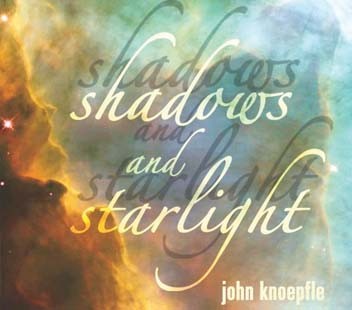 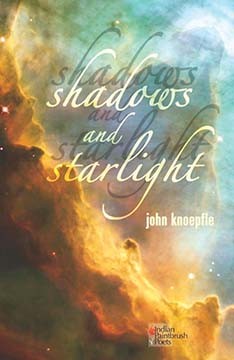 Few writers remain active in their ninth decade, but John Knoepfle is one of those few; his Shadows and Starlight, a new collection of poems, places all of his poetic qualities on display, melding invention, humor and insight into a compelling perspective on life’s foibles and ultimate mysteries. Knoepfle, a professor emeritus of creative writing at University of Illinois at Springfield, has authored 21 books, including his autobiography, I Look Around for My Life. A longtime resident of central Illinois, Knoepfle’s first book, Rivers into Islands (1965), brought him to national prominence. Seventeen books of poetry have followed since. As a Rockefeller Foundation Fellow and winner of the Mark Twain Award for Distinguished Contributions to Midwestern Literature (just two among many others), Knoepfle has long functioned as Springfield’s gray eminence of poetry.

The most important feature of Knoepfle’s work, his touchstone, is his consistent deployment of an informal voice. One could argue, in fact, that Knoepfle extends William Carlos Williams’ Modernist experiments by adopting an even more radically informal voice. For example, in “Thinking about These Eighty Eight Years,” he pitches his voice at conversation level, as if addressing his reader directly:


I am speaking now of these years
I should not say wasted on me
though I never became someone
a noted archeologist
or all american tackle (p. 3).

In conjunction with wry self-deprecation, “what do you remember old fox,” this conversational voice allows Knoepfle to create a sense of intimacy and trust with his readers.

As a result, Knoepfle can oscillate adroitly from the personal, “so I think I am finished now,” to the cosmic, sharing his sense of the sublime while standing before Creation:


a world as still as that strange time
before creation before time
some astonishment our deep space
waiting the uncountable stars (p. 6).

Indeed, Knoepfle goes beyond Williams in his willingness to base the progression of his imagination, not on linear logic (or on what Ezra Pound called the “perdamnable rhetoric” of traditional English verse), but on associational, mnemonic leaps that consistently stage the mundane, “well there was rain this morning // but it is clear if overcast now,” against the cosmic:


Make that egotistical I an eye
smaller and smaller until you are
adrift beyond the limits of space
and the wounded heavens
give you back only their silence (“Muddled Thoughts this Afternoon”).

In addition to contrasting the cosmic to the mundane, Knoepfle shifts his perspective from the immediate trivia of living to an awareness of personal transience and impending demise in many poems, including “Poem in Two Parts and No Ending.” To catalogue daily life in small acts of appreciation for simple things – “barbecued drawn pork // and a wedge of raspberry pie” at the Blue Dog Café – elevates such ephemera by charging it with numinous meaning: “I witness for myself.” In other words, by giving witness, the poet invests his perception of minute detail with an awareness of the divine in his personal life. Ultimately, this investment leads to one of the most startlingly memorable tropes in the entire collection:


meantime the angel of death
sleeks his bright wings
says this is interesting
this thing you are doing
do you want me to wait
until you are finished (p. 58).

Here, without descending into cliché or melodrama, Knoepfle contrasts the one fact of life everyone must acknowledge – death – with a compelling sense of humor that his own day-to-day activities might, indeed, be meaningless after all.

In the penultimate poem of this collection, “Poet as Shaman,” Knoepfle, like Prospero, relinquishes his magic, the art of poetry, “now as I conclude // my part in this revel // beginning my ending here,” while claiming for poetry the ability to illuminate, to place in perspective, the five hundred billion galaxies, and recover a sense of awe at their brilliance: “but the poet can do this for you // as I drift to my own ending // he can leave you with those first stars” (71). Just as Prospero, Knoepfle saves his best magic for last.

A review such as this can scarcely chart the contours of what is a very rich book, the fruit of a lifetime spent in the creation of verse. The publication of John Knoepfle’s Shadows and Starlight is a remarkable achievement in what has been a long and successful career. Moreover, its publication significantly enriches the canon of Midwestern poetry.

Shadows and Starlight is now available at www.johnknoepfle.com, Barnes and Noble, and Amazon.

Brian Jackson received his Ph.D. from Saint Louis University in trans-Atlantic Modernism. His own collection of poetry, From Delancey West, will be published this fall.