Millers only half a movie 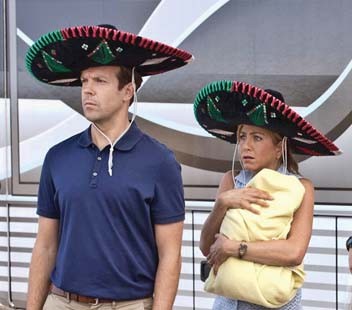 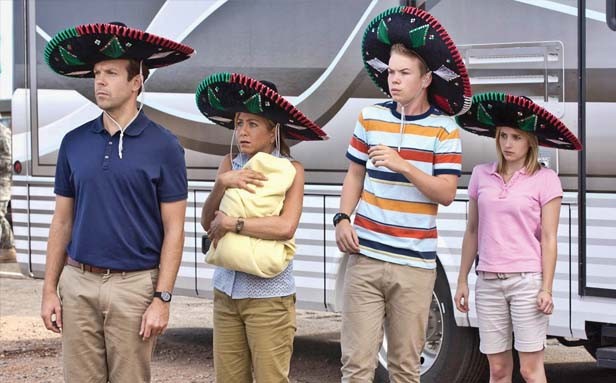 There’s a good idea rattling around in Rawson Thurber’s We’re the Millers. Unfortunately, it’s a premise that only makes for about half a movie and it’s an ironic state of affairs what with four credited writers. Yeah, there are a few laughs along the way – a couple of them of the “very big” variety – but there’s no denying that by the one hour mark, this generic comedy is spinning its wheels.

Jason Sudeikis is David Clark, a low-level drug dealer who finds himself between a rock and a hard place. He’s lost the money he owes his supplier Brad Gurdlinger (Ed Helms) and has no way to pay it back. So he reluctantly agrees to go to Mexico to bring back a “smidge” of marijuana. Realizing that he’d do nothing but draw attention to himself when crossing the border alone, David decides to hire a family to lend this operation a façade of normalcy. Of course, doing so is easier said than done, but he manages to convince Rose (Jennifer Aniston), a stripper he has a crush on, to pose as his wife; Kenny (Will Poulter), a lonely, awkward teenage boy who lives in his building, takes the role of his son; and street urchin Casey (Emma Roberts) reluctantly decides to pretend to be his daughter.

It doesn’t come as a big surprise that these four eventually take to these parts like puppies to chew toys, coming to embrace roles that they never had the opportunity to assume in real life. The sentiment doesn’t quite jive with the ribald humor that is the film’s bread-and-butter. While none of the gags skirt the edge of tastelessness as in The Hangover films – though seeing the result of a tarantula bite in the worst place possible approaches it – the language is coarse throughout and at times pays off with some hilariously crude jokes. (Watch out for a game of Pictionary that goes horribly wrong.) However, they’re isolated throughout and as a result the movie never builds up a head of comedic steam.

However, there’s no mistaking that once the Millers have to contend with two nefarious drug dealers, as well as a couple of middle-age squares (Nick Offerman and Kathryn Hahn) again and again, it’s obvious that the script is out of ideas and that the movie is simply spinning its wheels. Yep, there’s a good idea in We’re the Millers – too bad the writers couldn’t find a couple more to go with it.