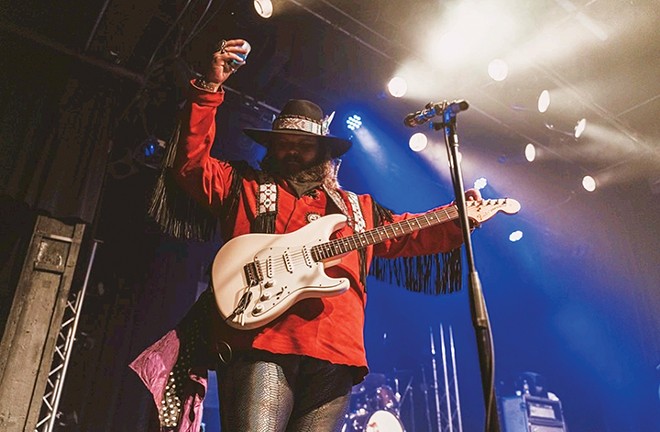 Here we come a-wandering into the 2022 full-fledged summertime with an assortment of music happenings from an assortment of venues and artists. From music theater to open mics, sweet corn tunes to canine rescue singing, beer garden blasts to family fun concerts, we are in the glory days of live music in mid-July. Let's see what there is to hear. I dearly enjoy starting off our romps among the fields of live music performance with a quick rundown of Thursday evening shows just to revel in the beauty and diversity of it all. Starting with the mod-country sounds of Springpatch Serenade at the Curve Inn, featuring the fiddling violin work of Polly Launay, and moving on to the Colin Helton Band mix of originals and deep covers at Casey's Pub, while taking in the harmonizing melodies of Myers + Brant + Paoni at Pease's at BUNN Gourmet just as MG Bailey's one-man band lands at Buzz Bomb, that there is a mighty good list already.

Add in Orchestra Saregama entertaining at the Y-Block for the weekly Levitt AMP concert as the central Illinois-based Rajesh Chalam and band bring a "high-energy fusion of Bollywood hits, Hindustani classics and American popular music" to the family-oriented, downtown music place as The Hangovers and UNCHAiNED (that's how they spell it) take on the Sherman Village Park Amphitheater at the same time.

The big event of our weekend entertainment lineup would have to be the world-famous (well, nearly) Chatham Jaycees Sweet Corn Festival featuring live music by Stereo Typical and Brushville on Friday with Felix and the Fingers (looks like dueling pianos is the new thing) plus headliners UNCHAiNED (still spelled that way) on Saturday. Don't forget (and how could you?) that the all-important and ever amazing Illinois Championship Cow Chip Throwing comes plopping and dropping in on Saturday afternoon, 2 to 5 p.m.

For the coolest weekend event concerning traveling bands and interesting venues, my ticket is on Saturday evening out at the Knob Hill Landscape Company grounds past the airport on West Camp Sangamo Road when the Rio Tripiano Band from Texas and the Drew Cooper Band from Arizona play the Leaf Life Stage at Knob Hill's once-a-month Summer Music series. Rio and his bass player, Justin, were once in a group known as Copper Chief and Drew recorded his latest album at Dave Grohl's Studio 606, just for a reference, and both are known for high-energy, hot-rocking, cool-country performances. Get your tickets at the Knob Hill website and you should know that this "dog-friendly" event is also supporting the good work done by the WILD Canine Rescue organization.

Now for our theater rendezvous, the Legacy Theatre presents what is known in the biz as the S'Wonderful Gershwin musical, My One and Only, for not quite two more weeks with the final show on Sunday, July 24. Directed by Scott Richardson, so we know right there the show will be extraordinary, and with an all-star cast of Matthew Woodson, Anna Benoit, Ed MacMurdo and Betsy Buttell, you are definitely in for a treat. But to top it all off, for our local music followers, Johnnie Owens and Debbie Ross are in the cast as well. And in a tidbit of local lore, Scott directed this piece at our Muni in 1991 and Johnnie will reprise his part from that show in this one, just a couple of a few years later. Did I hear someone exclaim, "How cool is that"?

Of course, you should look at all the other delightful music shows going on all week long listed in our listings. Until the next time...