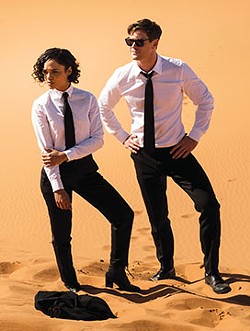 I was pretty sure the world didn’t need another Men in Black movie.  I’m sad to say that after sitting through the latest installment of the franchise, I now know I was right.

2019’s “Cinematic Summer of Blah” (copyright pending) continues with F. Gary Gray’s Men in Black: International, a film whose sell-by date is long past as the concept of a secret government agency monitoring alien activity is far from fresh.  This fourth entry in the franchise will go down as yet another failed reboot of a once vital series, another piece of evidence in the ever-mounting case that Hollywood is out of fresh ideas…at least during the summer season.

Other than Avengers: Endgame and Booksmart, the last six weeks have seen a collection of underachieving or barely passable movies litter the nation’s screens. MIB: Int’l continues this trend, a rote, dull-as-dishwater exercise that fails to excite, fails to amuse and fails to impress.  Even the presence of stars Chris Hemsworth and Tessa Thompson can’t save this half-baked feature that will make it difficult to explain to this generation just what made the original MIB movies – at least entries one and three –  so memorable.

Bouncing back and forth in time, from today to 1996, and around the world from Paris, New York City, London, Marrikesh and back again, the movie limps from one locale to another, failing to generate any excitement concerning their new team or their mission.  Agent H (Hemsworth) has been an agent far too long, relying on his charm instead of his wits, becoming a bit of a laughing stock to his peers.  The ying to his yang is Agent M (Thompson), the very definition of tenaciousness who had an encounter with an alien as a young girl, and has devoted her life to uncover proof of their existence and the MIB as well.  The veteran and the rookie are paired to watch over a visiting alien, a simple mission that goes sideways, resulting in their charge’s death and a weapon of mass destruction falling into their hands.  Needless to say, they find themselves chased by aliens as well as fellow agents, all of whom want this dangerous device.

There’s simply no sense of fun or urgency to the film, as it resembles an exercise akin to connecting the dots of a puzzle to a picture you deduce before it’s completed.  The action scenes are static and unimaginatively staged, Chris Bacon’s score the only thing providing a degree of excitement.  Gray lets each segment run a beat too long, never cutting on action or with precision. The movie is a visually bland, uninspired, tepid affair that ends up being dull as dishwater.

Hewsworth is fine here, though there’s the sense that he’s trying too hard at times.  The film’s only saving grace is Thompson, who brings a sense of wit and intelligence to her role that, judging from the simplistic dialogue she’s forced to utter, isn’t in the script.  The actress’ natural sense of charm and intelligence shines through, as she makes Agent M the only believable or enjoyable thing in this misfire.  She brings a sense of exuberance as well as a winning naiveté to the part.  Her enthusiasm is the one bright light in this dismal exercise and here’s hoping she gets the star-making role she deserves sooner rather than later.

As for the Men in Black franchise, I’m pretty sure it won’t be thriving with continuing entries.  I don’t need to see any more to know I’m right.

Managing mental health during a pandemic