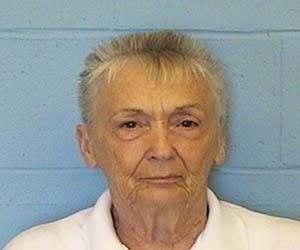 The families of convicted murderer Shirley Skinner and her victim, Steven Watkins, have feuded for years. But at a clemency hearing Jan. 15, relatives sat next to each other to argue one question: Should Skinner die in prison?

Family members of Watkins argued that the man didn’t get to spend his elderly years with his family, and neither should Skinner.

“Thousands of inmates each year die in prison as they were serving sentences they were given,” said Alex Watkins, the now 14-year-old daughter of the late Steven Watkins.

Skinner has petitioned the Illinois Prison Review Board for executive clemency. She was convicted of first-degree murder in 2010 for the Nov. 25, 2008, shooting of 32-year-old Steven Watkins, the estranged husband of Skinner’s granddaughter, Jennifer Watkins. Steven Watkins had arrived at the Skinner family home in Ashland where Jennifer Watkins lived to pick up their 17-month-old daughter, Sidney, for visitation when he was shot in the back of the head.

In the nearly six years since the murder the case has been surrounded by dramatic events, which have turned into a public battle between the Watkins and Skinner families.

For example, Jennifer Watkins fled with Sidney to Florida in 2010, where Watkins was later jailed for five months in a custody battle with Steven’s parents, Dale and Penny Watkins.

The case became a “whodunit” when Skinner’s son, Ed Skinner, said after the trial that she didn’t do it. He alleged that Jennifer Watkins pulled the trigger.

The Watkins family also filed a wrongful death suit, which alleges the Skinner family conspired in the murder.

More recently, on Jan. 16, a day after Skinner’s daughter, Debra Webster, spoke at the clemency hearing in support of her mother’s petition, Webster was arrested in Logan County for failing to pay outstanding attorney bills.

Adam Monreal, chairman of the Prison Review Board, pointed out the hearing was not a retrial of Skinner’s case, nor was it about the drama.

“We’re not here to air the dirty laundry between the two families,” he said.

Rather, the board must decide whether Skinner, now 78, who was sentenced to 55 years in prison, should be permitted to go home on account of failing health.

The judge could have given her a shorter sentence, Monreal said. By sentencing Skinner to an additional 10 years beyond the minimum sentence, in spite of knowing Skinner’s age, the judge was “essentially recognizing that this was going to be a life sentence,” Monreal said.

Webster and Skinner’s husband, Kenneth, appeared before the board with legal counsel Andrea Lyon, where they asked that Skinner be allowed to spend the remainder of her sentence at home due to poor health. Webster said Skinner has had three strokes and “several bouts of cancer” in the three-and-a-half years she has been at Logan Correctional Center in Lincoln.

“I hate to see her die in prison,” Webster said.

Skinner’s plea for clemency was unlike some other cases the board sees, where the petitioner admits fault and asks for a pardon. Instead, Skinner is asking that her sentence be commuted, which means her sentence would be reduced. Thus she would not necessarily be pardoned. Lyon requested the board recommend to the governor that Skinner’s sentence be commuted and that she be allowed to spend the remaining five years of parole at home.

This is likely Skinner’s last shot at getting out of prison. Her case has already been through the appeals process, and an individual can only apply again for clemency at least one year after a petition is denied.

It is unlikely Skinner’s petition will be successful, though, according to Springfield attorney Scott Sabin. Sabin, who has experience in representing clemency petitioners and whose partner, Michael Metnick, has represented the Watkins family in the custody battle for Sidney, said petitions can sometimes take years before a decision comes back, if at all. Clemency tends to be granted “quite judiciously,” he said.

Sabin said Skinner doesn’t have to admit fault to request clemency. A petitioner’s odds of success decrease when he or she does not admit to the conviction, Sabin said, but in Skinner’s case, he doubts admitting fault would have helped.