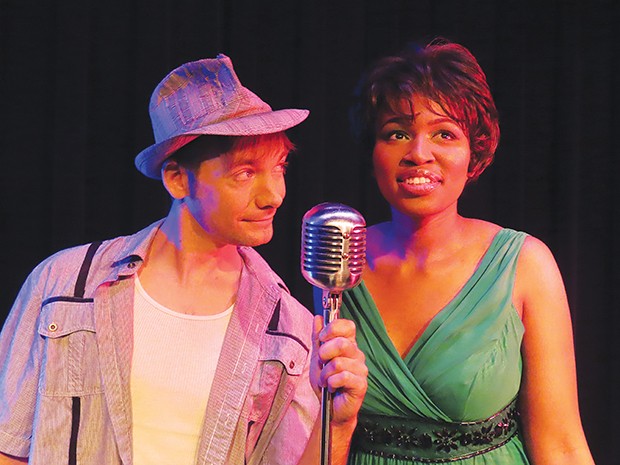 Photo by Gus Gordon
Casey Cantrall as Huey and Jasmine French as Felicia.

When the musical Memphis opened on Broadway in 2009 it was certainly successful, winning four Tony Awards including Best Musical. Critical response, however, was mixed, with the book by Joe DiPietro (of All Shook Up, seen this summer at Theatre in the Park) and music by Bon Jovi founding member David Bryan both singled out as formulaic.

But the tight, dynamic production under director Reggie Guyton and choreographer Montel Morgan at the Hoogland Center for the Arts is a revelation. Perhaps it’s a sense of scale. While smaller and less glamorous than Broadway, this Memphis is theatrically assured and visually sophisticated and accomplished, with costumes by Debi Iams, sets by T. David Parker and makeup and hair by Destiny Taylor. Contributions by Tyler Maul, music director, and Nicole V. Pittman, vocal director, are simply terrific.

Set in 1955, Memphis captures a pivotal moment in musical (and American) history when Rhythm and Blues, known at the time as “race music,” broke through to a larger audience just as rock ’n’ roll was coming on the scene. While the show celebrates the contributions of African-Americans, it also throws a spotlight on the undeniable reality of wholesale cultural appropriation, as the white entertainment establishment rushed in to plunder the contributions of an entire generation of black artists and entrepreneurs.

The story is simple. Huey Calhoun (played by Casey Cantrall) is a poor semiliterate white country boy who stumbles down the stairs of a Memphis Beale Street club and falls head over heels for both the intoxicating rhythm and blues sound and a young black singer, Felicia (Jasmine French). Huey insinuates himself onto a Memphis mainstream radio station as a DJ and seemingly single-handedly introduces R&B to the entire nation. Along the way Casey and Jasmine face opposition from her justifiably concerned brother (Alex ”Lex” Glover), his racist mother (Sherri D. Mitchell) and the entire brutal system of state-sponsored segregation and capitalist-endorsed “otherness.”

What on Broadway felt slick and formulaic, at the Hoogland seems fresh and illuminating. Much of that is thanks to the fine cast that Guyton has brought together.

But perhaps some of it is timing. Was it really only 10 years ago when it seemed (at least to many white folks) as if we were living in a “post-racial” society? In 2019, the challenges of 1955 – cultural appropriation, the threat and reality of violence towards minorities and ethnic groups – seem more present than ever.

Perhaps it is that the nation, including Springfield, has once again become a little too willing to deny racism as a serious issue, and is a bit closer to Memphis in 1955 than we’d care to admit. The just-published book to read on “growing up black” in Springfield is NBA star and Olympic gold medalist Andre Iguodala’s fine autobiography, The Sixth Man: A Memoir. Released last week is a new survey of Sangamon County residents wherein only a third believe “everyone is treated equally,” and 45% of non-white respondents report experiencing poor treatment due to their race or ethnicity.

Yet it’s not all bad news. This production at the Hoogland, conceived and thrillingly executed by a local, mostly African-American, production team and cast, gives us reason to celebrate, if only for one great evening in the theater.

Dennis Thread, a freelance writer and creative director with experience in the entertainment industry, advocacy, public policy and corporate/institutional communications, has lived in New York City, Dallas and Boston. Now he is home once again in Springfield.