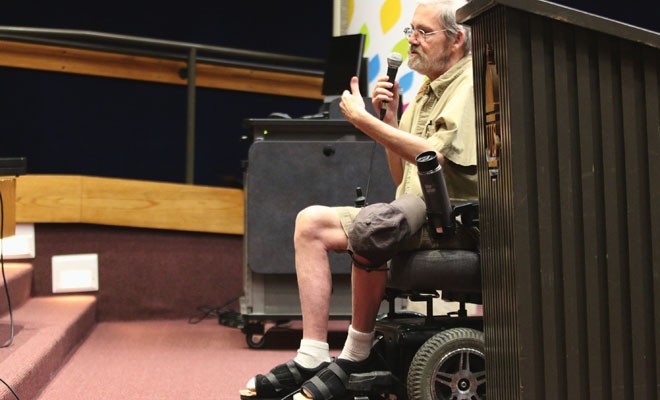 At a May 21 public hearing in Springfield, several speakers asked the state to speed up the program’s implementation and make it easier for both growers and users to partake.

Illinois’ medical marijuana law was approved by lawmakers in August 2013, but the four-year pilot program has yet to be implemented because regulations are still being approved. Several speakers on May 21 expressed concern that the proposed restrictions on users will deny relief to certain groups of people, while the rules for cultivators and dispensaries will hand the potentially lucrative industry to wealthy investors. Meanwhile, many potential users want the program rolled out immediately to provide relief for themselves or suffering family members.

Although the hearing was hosted by the Illinois Department of Public Health regarding only the rules it has proposed, speakers used the opportunity to voice concerns about proposed regulations from other state agencies as well.

Dennis Garland of Chatham is a longtime advocate of medical marijuana. He uses a motorized wheelchair because of a spinal defect and nerve damage. Garland told regulators that marijuana is the only thing that eases his pain without causing unwanted side effects.

“There’s no risk of a negative reaction from cannabis, other than you might eat a box of Oreos,” Garland joked.

He said the stigma of marijuana has resulted in the state’s program being overly restrictive.

“Too many folks have treated this like, ‘the folks that want marijuana are just looking to have a good time, so let’s put as many barricades in their way as they can and make them pay as much as we can make them pay,’ ” Garland said.

He and several other speakers objected to making patients go through background checks, fingerprinting and other processes in order to access medical marijuana.

Joseph Sameh with the Midwest Patient Resource Center in Northbrook, Illinois, said he may open a medical marijuana dispensary, but he believes the current regulations treat patients like suspects.

“The entire purpose of this pilot program is indicated by the name, Compassionate Care,” Sameh said. “Where is the compassion in requiring a person with one of the serious qualifying conditions to subject him or herself to a fingerprint screening, as if the patient is a criminal or otherwise under investigation?”

William Bishop III of Springfield said he is concerned the rules will exclude minorities.

“My biggest concern is the cost of the program and so much involvement with law enforcement, fingerprinting folks just to get a card,” Bishop said.

“This will eliminate poor people and minorities from the program, and you really need to address these issues,” Bishop said.

Mauricio Marin of Chicago drove to Springfield to speak at the hearing. He said he used to be an undocumented alien in the United States and went on to serve in the military in both Iraq and Afghanistan. When a vehicle in which he was traveling was hit by a roadside bomb, Marin began to suffer debilitating anxiety.

“I went to the VA hospital, and they just threw medication at me,” he said. “The anxiety went down and the anger went down, but I wasn’t me. I was just a zombie walking around. I couldn’t think.”

He reluctantly began to use marijuana once a week for his anxiety, but he says it worked.

“It got to the point where I didn’t need to take the medication,” he said.

Corey Ball of Springfield said he returned from his service in the U.S. Army and had an experience similar to Marin’s.

“Numerous people I know and served with went to the VA,” Ball said. “They are throwing a bunch of psychotropic drugs at people as just blanket medications. I think marijuana is a much safer starting point before you start prescription drugs that you get addicted to and have to be on constantly.”

Both Marin and Ball urged regulators to speed up implementation of the medical marijuana program so they could legally seek relief.

Garth Reynolds, executive director of the Illinois Pharmacists Association, said pharmacists currently have no role in the program. Pharmacists should be involved to help determine if any negative drug interactions may occur, Reynolds said. His suggestion was met with scorn by some speakers.

Silvia Orizava of Chicago said she believes pharmacists only want to ensure they get a cut of whatever money the program may generate.

“There are a lot of people right now trying to see how they can get involved, how they can make more money,” Orizava said. “I really think that this is about the patient; it’s not about making money. I know pharmaceutical companies want to get involved now. Where were they 10 years ago when we tried to pass this bill for patients?”

She said the cost of complying with the proposed regulations is too high for many people, denying them relief that would otherwise be as cheap as planting a seed.

“This program has a lot of potential to be very successful if we do it right,” Orizava said. “If we make mistakes in the program, this program will fail. … This program is being designed for wealthy people, and the minority people and the poor people are being left behind. This program should be for those people also, because that will make the program successful.”