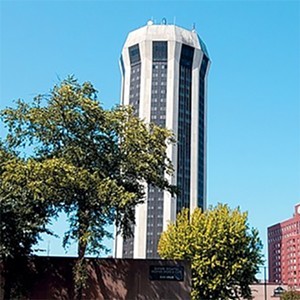 Mayor Jim Langfelder is working to salvage a proposed deal to convert the downtown Wyndham City Centre hotel into a combined hotel and market-rate apartment complex so the Springfield City Council will change course and approve a zoning variance for the project Aug. 3.

A plan to convert most of the 30-story building's more than 400 hotel rooms into apartments failed July 19 when the council voted 5-5 on a zoning variance that would allow for more than 200 dwelling units at the site at 700 E. Adams St. Seven votes are needed to approve the variance, and Langfelder, who didn't vote July 19, said he would cast the deciding vote in favor of the project if one more council member will go along.

The mayor told Illinois Times he hopes at least one of the five council members voting "no" can be convinced to propose another vote on the plan at the Aug. 3 meeting and vote in favor of it.

Several members opposing the variance have said they doubted there would be adequate demand in Springfield for the mostly studio and one-bedroom apartments that GoodHomes said it would rent for $700 to $1,200 per month. Some were worried Springfield would lose conventions in the future if most of the building's hotel rooms go away.

Langfelder said there's "going to be a need" for more downtown apartments, and he would like to see the plan proceed.

The mayor said he hopes the proposed developer, New York-based GoodHomes, can be persuaded to retain more than 80 hotel rooms for conventions as part of the company's proposed $25 million renovation of the building. He said he asked GoodHomes officials to consider providing up to 200 hotel rooms. The company originally proposed 80 hotel rooms and 320 apartments ranging in size from 320 to 800 square feet, according to GoodHomes spokesman and principal David Mitchell. Under GoodHomes' plan, convention space inside the building would be retained.

Scott Dahl, director of the Springfield Convention and Visitors Bureau, told the council reducing the number of available hotel rooms to 80 would affect the city's ability to accommodate 26 conventions scheduled from 2023 through 2025.

Preserving 200 rooms at the site "would be less of an impact for future conventions" but still could affect the city's ability to retain and attract conventions amid an economic rebound during the COVID-19 pandemic, he said.

Mitchell and the building's current owner, Al Rajabi of Tower Capital Group in San Antonio, Texas, couldn't be reached for comment on Langfelder's efforts to secure another vote on the project.

Langfelder commended Rajabi, who received $847,000 in federal Payroll Protection Program funding during the pandemic, for keeping the Wyndham open in the early months of the pandemic when other hotels were shutting their doors.

Rajabi still owes $1.12 million in electric bills to City Water, Light and Power because of a loss of business related to COVID-19, said Jim Zerkle, the city's chief legal counsel.

Rajabi told the council during more than 90 minutes of debate on the plan that the panel's failure to pave the way for GoodHomes' proposed renovations to the 49-year-old building would leave him no choice but to use current zoning to renovate the structure for low-income, government-subsidized housing. Existing zoning allows for up to 200 dwelling units.

Voting for the zoning variance were council members Shawn Gregory of Ward 2; Roy Williams Jr. of Ward 3; Lakeisha Purchase of Ward 5 – the ward in which the hotel sits; Joe McMenamin of Ward 7; and Erin Conley of Ward 8.

Voting "no" were Chuck Redpath of Ward 1; John Fulgenzi of Ward 4; Kristin DiCenso of Ward 6; Jim Donelan of Ward 9; and Ralph Hanauer of Ward 10.

The proposal needs a supermajority of seven "yes" votes for approval because the project failed to receive enough votes from the Springfield Planning and Zoning Commission, an advisory group, to result in a positive recommendation to the council.

Rajabi said failing to accept the GoodHomes plan to buy and renovate the hotel – and include a new amenity for tourists, an observation deck on the top floor – would result in him closing the hotel, closing down the Starbucks he owns inside the building and renovating the building for the only other apartment option supported by his lender: Up to 200 low-income apartments in an arrangement with the federal government that would be locked in for decades.

Rajabi didn't say when those changes might take place. He said he wasn't willing to give up the hotel and allow it to revert to his lender so the bank could continue to operate it as a hotel temporarily and potentially sell it to a future hotel operator.

Ward 1 Ald. Chuck Redpath told Rajabi that his argument to the council sounded like a threat.

Rajabi responded, "I apologize if it comes across as a threat." But he said he had limited options in the current climate for the hospitality industry.

Continuing to operate the Wyndham as a full-service hotel wouldn't work financially because of a downturn in occupancy related to the COVID-19 pandemic, he said.

The Wyndham fell on hard times and was purchased by Rajabi's company, Tower Capital Group, in 2019 for $7.4 million after a foreclosure proceeding.

Rajabi said Tower was 70% finished with a design to renovate the hotel and convert it into a Delta by Marriott hotel when COVID-19 hit in early 2020. Average occupancy at the hotel plummeted from 42.6% before the pandemic to 22% currently, Rajabi said.

Rajabi said he hasn't been able to find a bank or other lender willing to finance renovation of a "big box" hotel like the Wyndham in the current climate for the hospitality industry.

Mitchell told the council before the vote, "Our goal is to be your partner in revitalizing downtown Springfield."

He said the entire project would cost GoodHomes about $40 million, which includes purchase of the property, design costs, environmental studies and other non-construction expenses. The company might pursue tax-increment financing funding from the city to help offset some expenses, he said.

DiCenso said she doubted Mitchell's estimate that there were 54,000 workers employed within a one-mile radius of the Wyndham, and his claim that plenty of the workers would jump at the chance to live downtown in relatively small apartments and pay the rents Mitchell would charge for the ability to walk to work.

"This isn't Chicago," she said. "We're a different demographic. We need the hotel rooms, but this is a tough one for us. ... We're a corn dog and doughnut type of town. Visitors come here because we're affordable."