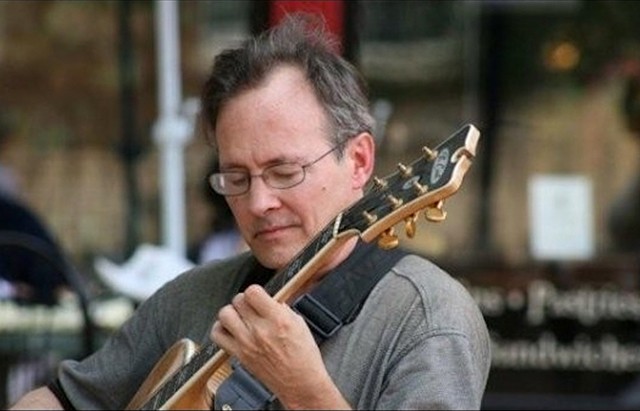 Maybe it’s the heat, maybe it’s the rain; more likely it’s both or neither, but whatever is going on, the music always starts to bloom around this time of year. Then everything melds – and sometimes melts – perfectly into summer festivals, outdoor gigs, burgoos, bashes, homecomings, fairs, beer tents, winery patios, and all such lovely types of things.

On Friday evening kick off your busy weekend of fests and fairs with one of Springfield’s most endearing (and yes, enduring) musicians as Sam Crain brings his extensive and provocative jazz guitar talents and his quartet to Robbie’s. Sam has an incredibly well-kept website documenting his career and life achievements, plus handy tips, Sam FAQ’s, fun facts and much more. He’s played with almost everyone, plus produced (at last count) 24 CDs of original and cover music. If you need or want to know more, I suggest a Friday night visit to Robbie’s – and maybe some ice cream afterwards. Sam’s favorite flavor is listed on the fun facts page as “pralines and cream,” just in case you were wondering. Thanks for all the great music, Sam, and all that’s left to come.

Friday night also gives us two major stars in their respective fields that both came to town early in their careers, which was during the heyday of the Sangamon Valley Roots Revival. Chris Knight, the tough and tangy East Kentucky singer-songwriter, plays at Boondocks, while Big Sandy brings his Fly-Rite Boys to Bar None. Knight, out with Little Victories, his first new record in a decade, worked with his original producer Ray Kennedy in featuring respected talents such as Buddy Miller, Dan Baird and John Prine as guests on this powerful collection of well-crafted, hard-hitting tunes. He is always on it live with a no-nonsense approach to playing his no-nonsense music. Big Sandy likes to sing his songs while having fun with the crowd as his band of hot-playing cool cats backs him up with gallant and beguiling gusto. Now well into 25 years of touring and recording, Big Sandy is a treasure and a treat for all who appreciate his kind ways, supple voice and swinging style.

Craig Gerdes, a rural Illinois product by way of Nashville and Austin, sits in the “too country for contemporary country” category, but that’s a mighty fine table to take a seat. Gerdes’ newest release, Smokin, Drinkin and Gamblin, really hangs more in the Texas outlaw country canon, as poignantly described in a tune called “Redneck Sonsabitches” that tells a tale related to Craig by none other than the prolific and profound Billy Joe Shaver. Gerdes brings his cowboy hat and boots plus his songs and sentiments to The Alibi in Rochester at 8 p.m. on Friday.

In the meantime, for outside, daytime, downtown music happenings, there’s the Old Capitol Art Fair on Saturday and Sunday and Pridefest on Saturday. Both events have very good live music offerings and lots of other worthwhile stuff to do and see. Thornhill gets the double-duty award on Saturday with appearances at 11:15 in the morning at the Art Fair and 2:45 in the afternoon at Pridefest. Also on Saturday Petersburg hosts its second annual Drinkin’ with Lincoln street fest on the square, with live music from 11 a.m. to 6 p.m. plus other fun-filled activities.

Finish off the weekend with Sunday afternoon and evening shows by Mary Jo Curry Band blues-ing it up at Lincoln Park (4-7), Chicago’s Mike Zubrini & Funktastic at The Curve Inn for a funking good time (6-9), and/or Suburban Mystics mesmerizing folks at Hill Prairie Winery near Oakford (2-5).

See you next week as we wrap up a “May-be” month of music.