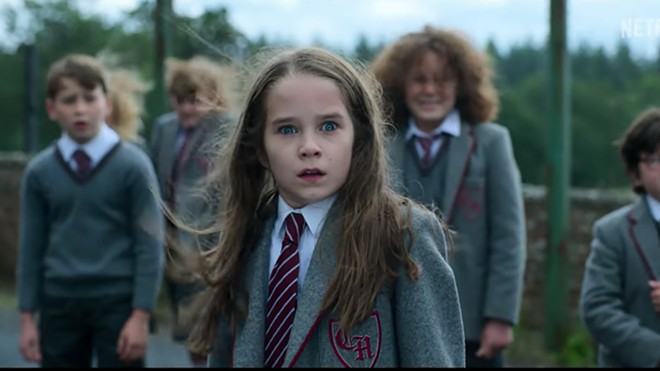 There are some films that come from out of the blue and take your breath away. Such is the case with Matthew Warchus' Matilda the Musical, an adaptation of the successful London stage play, now streaming on Netflix. Not being familiar with the source material, I wasn't prepared for the glorious songs written by Tim Minchin, the touching journey of the titular character or the fierce energy with which all of this has been executed. Roald Dahl's novel about an extraordinary young girl who manages to maintain a sense of hope while dealing with oppressive parents (Stephen Graham and Andrea Riseborough) and a bullying headmaster (Emma Thompson) is brought to life with a surprising sense of exuberance.

Obviously, those who have seen the stage musical would likely have been less surprised by all of this, but no one could have been prepared for Alisha Weir, the heartbreaking dynamo who tackles the lead role with the vigor of a hungry alligator going after a near-sighted golfer. Only 10 years old at the time of filming, the young performer throws the production on her back and carries it with a sense of confidence that belies her age. She is astonishing and makes Matilda not simply a movie to watch but an entertainment to experience. Streaming on Netflix.

Damien Chazelle's Babylon has been called "exhausting," "overstuffed," "outlandish," "excessive," "messy" and "hysterical," while being dismissed by many as essentially a remake of Paul Thomas Anderson's Boogie Nights. This claim and all these statements are true, and while Chazelle is guilty of biting off more than he can chew, I couldn't help but admire his ambition as well as his vision, which he surely knew would be divisive. Still, the movie proves to be a testament to the power of cinema as well as a plea to embrace it

The film follows movie star Jack Conrad (Brad Pitt), up-and-coming starlet Nellie LeRoy (Margot Robbie) and jack-of-all-trades Manny Torres (Diego Calva) as they navigate the transition between the silent and sound eras, each experiencing highs and lows, Chazelle portraying the film industry as a place where magic is made at all costs, while the private lives of those involved are an endless bacchanal. Without question, Babylon is a flawed film, a bloated piece of work that doesn't completely succeed, its desperate tones not always melding as they should. It's a grand swing for the fences, and while the filmmaker doesn't hit it out of the park, the result is worthwhile, nonetheless. In theaters.

Noise a bothersome but worthy lesson

There are times when a filmmaker and his cast can be too effective. Case in point, Noah Baumbach's White Noise, an ambitious adaptation of Don DeLillo's novel focusing on Jack Gladney (Adam Driver), his wife Babette (Greta Gerwig), their four kids and the academics at the university he teaches at. So many of these characters are self-absorbed narcissists – people you wouldn't want to spend five minutes with – let alone watch a film about. Which is part of the problem with Noise – the characters are reprehensible, the situations they find themselves are ridiculous and their interactions in which they talk over each other, each involved in their own conversation, none of them listening to one another – will likely prompt you to run out of the theater, your hands covering your ears.

But, of course, that's the point. It's to Baumbach's credit that he takes on such a weighty tome as DeLillo's cult novel, one that deals with death, narcissism and media distortion, a story which seems timelier now than when it was written. Yet, as much can be learned from a pack of fools as a wise man, and with that in mind, this may be the most worthwhile film of the season. Streaming on Netflix.