Masters of the new machine

The new guv’s remarks on salaries don’t add up 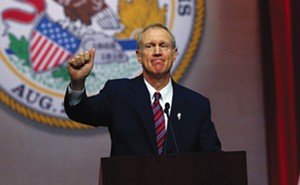 “We’re going to pay what we need to bring in talented people,” said Illinois’ new governor to reporters on Jan. 23. He was defending the many six-figure salaries he’s offered to the people he wants to handle the pumps and keep afloat a State of Illinois that is dead in the water and listing to port.

We must assume from these words that Mr. Rauner believes that the talent is not already in the state’s workforce, and that the talent is not in presumably because the state pays too little. However, when the guv addressed apprentice Bruces at the University of Chicago business school, he pointed a trembling finger at the state’s unpaid debt and suggested that part of the problem is that state worker salaries, which he said averaged around $64,000 in 2012, are too high. Noting to a Decatur audience that state government’s total payroll has gone up in recent years in spite of staff cutbacks that have left the state with fewer workers per capita than all but about a half-dozen states, he said,  “I think it’s a lot of overtime or manipulation of the system.”

So we are left with this key question unanswered: Are State of Illinois salaries too high or too low? The guv offers little help; he simultaneously insists that he must offer workers more money while arguing that workers already get too much. Certainly that average of 64 Gs sounds high but then we don’t know how that number was derived. We do know that multiple studies that adjust for education and other factors have concluded that, overall, public workers, including state workers, are slightly less well-paid for the same work than their private-sector mates. (The only people making good money are those with essential skills, like a $100,000 chief of staff to help a “First Lady” nobody voted for to schedule her nonexistent duties.) I agree with the Trib’s Eric Zorn: “It’s facile to claim that we could make a dent in the state budget by bringing public-sector compensation into line with private-sector compensation. If anything, these studies suggest, that would cost us money.”

And so it would – if the new boss wants to bring public-sector compensation into line with private-sector compensation across the whole spectrum of state positions. I suspect that our new CEO sees the workforce to be composed of two classes – masters and servants. The masters are the minders of the gears and pulleys of his promised new machine, and buying the talent needed to mind them is essential to his plan to rebuild state government to a new design.

It is the servants who actually work these gears and pulleys whom Mr. Rauner believes are paid too much. Business types often confuse cost-cutting with efficiency, and this one seems certain to at least try to do to state operations what he has done with the firms he has bought, which is reduce headcount to maintenance levels, hire more part-timers and cut benefits for new hires – in effect, sweat the staff.

Mr. Rauner’s new machine will be built to an old design. A low-wage-loose-regulation regime propelled Illinois to wealth in the glory days of industrial capitalism from the end of the Civil War until roughly the Great Depression. It was Adam Smith for the owners and Charles Darwin for the workers. Work was restructured and skills devalued as the craftsman was replaced by the corporate manager. The result in Mr. Rauner’s Chicago was mansions on the lakefront with Old Masters in the study and slums and sweatshops on the west side with rat shit in the sausage.

That lost Eden, in which a technological elite directed a workforce of industrial serfs toiling for bread, beckons to our Rauners. His recent remarks confirm his intention to use the tools and the assumptions of capitalism to reform a government that grew unwieldy in no small part to protect Illinoisans from the consequences of heedless capitalism. The rest of us can only hope that the creative destruction talked about by Joseph Schumpeter, one of its prophets, refers not to firms but to the lives of our public servants. If it does, AFSCME will have to open its orientation sessions for new state employees with showings of Fritz Lang’s Metropolis.

CORRECTION: I screwed up last week in writing that about 80 species of bird regularly appear in Chicago. The Audubon Society in that city states that the actual number is about 300.