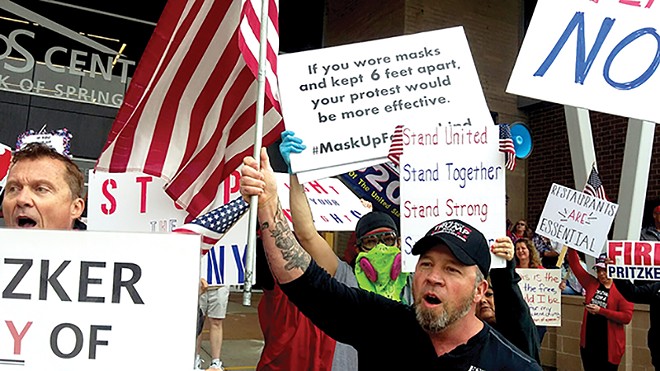 Optimism long has been my curse.

I have doubled down on Ford stock and bet big against the reelection of George W. Bush. No way, I figured, could the Bills lose four Super Bowls in a row.

Last week, I headed to the Bank of Springfield Center, not for the spectacle within as the state House convened, but for the madness surrounding. I had heard of protesters, with their swastikas and flags, but never had talked to any. Optimistic nature aside, I have taken pandemic seriously and so have stayed home, venturing out for food and not much else.

You can't believe everything you see on TV — I would talk to people and find a voice of reason. I started with folks who had just finished speaking with another reporter.

"I'm asthmatic and pushing 60; if I catch the virus, I'm at greater risk," I began. "None of you are wearing masks. This is my job. I have to work. What do you say to someone like me?"

"Stay home!" people yelled. And worse. The crowd around me grew larger, and closer. A few pulled masks from pockets to prove that they were equipped and responsible. One man drew near and asked why, if I was so worried, I stood within six feet of all these protesters. It seemed pointless to point out that I wasn't the one who'd advanced. Nor did I bring up a recent National Institute of Health study showing that droplets from loud talk can remain airborne for 14 minutes. There was plenty of shouting all around, with no discernible wind.

"I'm not a bank robber, I'm not a kid," someone yelled into a PA system. "I don't need a mask." I spoke with a maskless woman who asserted that she could just as easily get the virus standing in this crowd as at the medical lab where she works. She didn't want to discuss precautions taken by her employer.

I saw one counter-protester and one sign, small, containing the word "Nazi." A large flag that said "Trump 2020 Fuck Your Feelings" was proudly displayed. After getting primed outside the convention center, protesters rooted-and-tooted their way to the Capitol, escorted by police as they chanted "Open Illinois!" They marched right past Jim Herron, Ltd., where owner Marc Maslauski has, quietly, never closed. Alone in a men's clothing store that should have been bustling, we chatted for a half-hour: You can take off your mask, he invited after a few minutes: There's only been one other person here today. I did. We kept our distance.

There was sanitizer on one counter and masks fashioned from pocket squares on another. The alterations crew remains employed despite a plummet in business approaching 90% compared to prior wedding seasons, not to mention legislative sessions. Police have visited, but that was weeks ago, with no consequences so far. Someone had snitched. "I was a dumbass and put something on Facebook," Maslauski confesses.

Someone he didn't know called recently: Are you open? As an outlaw, Maslauski was wary, but this was no setup, just someone who needed a suit for his mother's funeral. "I told him to come in — I'll take care of you," Maslauski says. "Whether I think of myself as essential, there are people who think of this as essential."

That made sense. I wouldn't want to wear Dockers to anyone's funeral. I did not agree with everything that Maslauski posited — I'm not convinced that the governor's business interests are flourishing. But I was offered a free mask, there was no yelling and it was less crowded than Walmart, where customers wander from grocery aisles to clothing sections where they can buy all the cargo shorts and cheap shoes they desire. This place felt safer than the convention center or the supermarket.

While protesters chanted and Maslauski tended to an empty shop, Rep. Darren Bailey, R-Xenia, got tossed from the convention center floor for refusing to wear a mask. Rarely in the course of human endeavor has a politician accomplished so little by doing so little. It was a stunt predicated on ignorance. Anyone who says they know how this pandemic will play out is either lying or foolish.

As a working asthmatic who can't just stay home – who among us really can — I wish that folks would wear masks, and I wish that cops would ticket people who refuse, especially as we venture out more. A mask weighs a fraction of an ounce, experts say they help and my right to work as safely as possible is as important as anyone else's right. Put a swastika on your mask if you must, but wear one. It can't hurt. Do resisters also throw their peas and refuse to button coats in cold weather?

Forget together: America never has been about the collective us. We conjure wedge issues like abstinence to deliver Prohibition and press hot-button issues like immigration as if we are accomplishing something, and we look at ourselves years later and say, "Gee, wasn't that silly?" In the divide-and-conquer game, masks would seem a new low.

Then again, I'm an optimist.