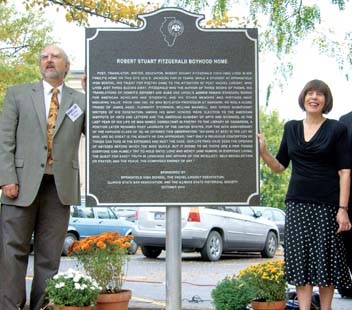 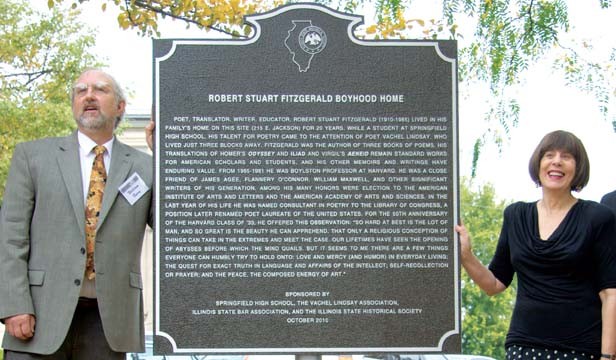 On Oct. 12, on what would have been the subject’s 100th birthday, a marker was unveiled at Second and Jackson streets, noting the once-presence nearby of the boyhood home of Robert S. Fitzgerald, the noted poet, teacher, and translator of the classics. (See “All is not well forever,” Nov. 19, 2009)

Robert Fitzgerald was arguably the most distinguished of the many writers who have been associated with Springfield, but he was far from the only one. In fact, we would have to dig up and melt down the Third Street tracks to have enough steel to erect a marker for every writer of note who passed through Springfield. However, the standard for a mark-able Springfield writer should be more than a hotel receipt in a scrapbook. The town should have had something to do with a writer’s literary achievement, if only by shaping the achiever.

That rules out many writers that Springfield would be proud to claim. Carl Sandburg won three Pulitzer Prizes, but he didn’t earn it having dinner at the governor’s mansion with Henry Horner. In 1952, speech writers on the staff of the presidential campaign of then-Governor Adlai Stevenson holed up in the Elks Club. Among them were such giants as Arthur M. Schlesinger, Jr., John Kenneth Galbraith, Archibald MacLeish and Bernard De Voto. Their man lost in a landslide, proving again that – when it comes to political contests against war heroes, anyway – the sword is definitely mightier than the pen.

Springfield of that day also was home to Jacksonvillean J. Edward Day, Stevenson staffer and for a time Illinois’ director of insurance. Day was that rarest of artists, the novel-writing Postmaster General (he served in the post under President Kennedy). Set in the capital city, Day’s Bartholf Street (1947) had “interesting ideological views,” according to one critic; what it didn’t have was readers. The curmudgeonly Evelyn Waugh dropped by in the 1950s for a private dinner with a local publisher; one doubts the experience – of the town, not the dinner – inspired in him anything beyond a desire to never see it again. Sangamon State University of hallowed memory used to stage a literary festival each year that featured such word warriors as Wendell Berry, Ken Kesey, Robert Bly and Vance Bourjaily; it was not inspiration, or even readers, that they came for, however, but a stipend and free drinks.

There are more fitting choices. Before he earned his reputation with such novels as Bang the Drum Slowly, Mark Harris worked in Springfield as a reporter for the International News Service. It was then that he got the idea to write the novel-cum-biography of Vachel Lindsay, City of Discontent. If Mr. Harris deserves a marker for writing about another writer’s life, and Mr. Fitzgerald deserves a marker as a translator of other writers’ works, why not give one to a critic of other writers’ works? I refer to Michael Skube. Skube was raised on the east side, and attended Feitshans and the Springfield College in Illinois of yore before embarking on a career that included a Pulitzer Prize in Criticism in 1989 for his work at the Raleigh News & Observer.

And what, you ask, about yours truly, the celebrated author of Honest Abe’s Honest Almanac? Looking back – which is the only way I have ever looked at my career – I conclude that I stand maybe 46th or 47th on the list of candidates for commemoration. Well above me on that list is Nellie Revell, the pride of Riverton and Springfield whose career as an ace big-city reporter, publicist, and talk show hostess included a stint in the 1920s as the author of the Wisdom for the Woeful advice column in Variety. Just behind me is the author of Lines from Lincoln Land, the late Alex Munro, a master of that subgenre of letters that we will here call Outsider Poetry. (From “The Greatest,” a tribute to Washington and Lincoln: “Each filled a most important role/And their efforts we’ve adored;/George Washington from the outset;/And Abe Lincoln later scored.”)

Priority ought to be given however to commemorating Benjamin P. Thomas. He was the Easterner who married into a prominent Springfield family and whose business success in insurance and cattle farming allowed him to pursue a late career as an historian. Thomas deserves to be remembered by two markers for separate literary feats – one, because he wrote what was for many years the best one-volume life of Lincoln, and another because he was the only Springfield Chamber of Commerce president to write anything at all.