"No one can do everything, but each of us can do something" 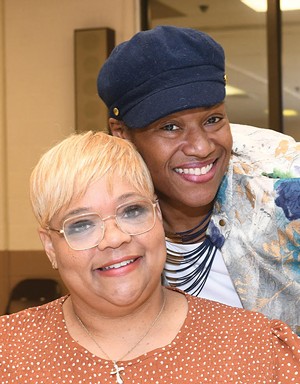 Springfield has long championed community-based and what's known as grassroots theater. We are now seeing a resurgence of such theater performances after a long COVID pause. It has caused me to reflect and wonder, what is it about these community projects? What brings these people together?

Donna Jefferson's theater journey has been a long trajectory from playing a lead in Dreamgirls 30 years ago this summer to Lorraine Hansberry's To Be Young, Gifted and Black, to writing her own plays and musicals, one of which premieres May 20-22 at the Hoogland Center for the Arts in downtown Springfield.

I attended a rehearsal at Union Baptist Church two weeks before opening to get a sense of this community play with a cast of more than 30 performers.

Mama's Day brings to life an important character in Jefferson's life, her mother, Fayetta Jefferson, who died in October 2020. The play tells the story of a woman who has chosen to use her life to transform her corner of the world.

Jefferson has strong roots in the community. Those roots inspired her in the creation of this play. She retired from Springfield Public Schools District 186 in 2020 and her mother died that same year.

"I wrote Mama's Day in four months in late 2021. I was still grieving – we'd traveled the world together. We were minutes away from going on our next trip when she passed away," said Jefferson. The title is an homage to Jefferson's favorite novel, Mama Day, by Gloria Naylor.

Rich, warm-voiced Kelly Spencer plays the role of Mama in the show, directed by Tony Young, who also plays Jefferson's father, and Ratchel Napier plays the autobiographical role of Jefferson.

Jefferson's main theme is, "No one can do everything, but each of us can do something."

Her play is a series of scenes from the life of this family, stretching over decades and including flashbacks. Keshia Robinson, who plays Donna's mother as a young woman, lights up the stage, something that several actors were doing in the rehearsal I saw two weeks before opening night.

Noting that the play has singing and dancing, I asked Jefferson if this is a musical or a play with music?

"I use the music and dance to drive home the points being made in the play," says Jefferson. "I would call it a musical, but Tony would call it a play with music," she adds. Erica Austin, Mia Jefferson and Elmada Meek choreograph the musical numbers.

I love rehearsals, the time to experiment, to find the keys to what works in a scene, the luxury to fail and to fix or improve. It was fascinating watching Austin guide a young Grace Ingersoll with her moves as she sang "Good Old Days." Director Young told her, "Take the stage, it's yours!" and in just a few moments, and with Austin's guidance, the young performer found that inner strength and her spot center stage. The entire room burst into applause at song's end.

The same happened with a group singing and dancing to "Twistin' the Night Away."

Seeing dancers who are able to act and tell a story at the same time is always exciting, and Ashley Harden, Keshia Robinson, Mark Franklin, Demetrius Young, VJ Moore and Derrick Stapleton all performed in musical numbers that commented on the story.

And what exactly is the story? I admit I am still not sure (and that's a good thing).

Jefferson sent me the script, but after watching part of a rehearsal, I decided not to read it so I could wait to experience the finished product in performance.

It is a story of Everyman (or, in this case, Everywoman) as we follow her life – how life happens to a person, the people put in her path, the highs and lows. There will be tears.

At one point, Young gathered the group together to explain the need to reach the audience. "I love what you're doing," he said, "but it means nothing if you don't reach out and touch your audience." And then, again, I witnessed them lighting up the stage.

Raw emotion is in this play and it reminds us of the effect we have on people – past, present and future.

I mentioned grassroots at the beginning of this article, which means this is an independent production where people have come together to make theater. They are renting the theater at the Hoogland Center and would be grateful for donations. Donna Jefferson can be reached by email at maria.181@gmail.com.

Phil Funkenbusch is a theater-maker from Havana, where he recently directed The Last of the Market Hunters by Dale Hamm and David Bakke. He can be reached at funkenbuschp@gmail.com.