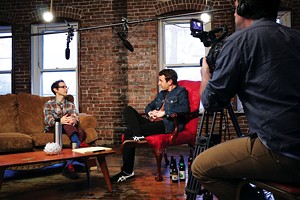 Those who visit the “Studio Show” YouTube channel and watch the episodes collected there are treated to a distinctive and seamless blend of deadpan comedy, arts reporting and civic pride, complete with in-depth segments on local visual artists, performances by area musicians and sketches set in distinctive Springfield locations (including at least one dazzling aerial shot of the city). Like poet Vachel Lindsay, a clear predecessor in Springfield boosterism, “The Studio Show” locates “the gentle, whimsical, laughing, heaven-sent” in a city often habitually associated with discontent.

“Studio Show” co-creator Dave Heinzel and co-host Keil (pronounced like “Kyle”) Isham, both 38, have been friends since meeting as freshmen at Springfield Southeast High School. They first worked with co-host Arlin Peebles, 35, in 2007 on a satirical video. “It was for a fictional musician named Skyler Duncan, played by Dave, who made ambient music videos,” recalls Peebles, who, along with Isham portrayed a member of Duncan’s fictitious band in the video.

A few years later, the three worked together again when Heinzel was in charge of the Student Film Club for Springfield Public Schools, helping to facilitate students’ creativity. Later still, the three were members of the “Old Man Skate Club” which met for nighttime skateboarding at Centennial Park (“when no good skaters are around”) with Heinzel setting up lighting equipment so they could see to skate inside the bowl.

The skate club experience turned out to be fortuitous. Another aging skateboarder happened to be Adam Strong, owner of the building at Spring Street and South Grand Avenue which had served as the original home of the Pharmacy Gallery and Art Space. “Adam kept telling me about the second floor of the building and I finally agreed to go over there and see it,” says Heinzel. “As soon as I saw it, I said, ‘I need to walk out of here with a key.’” Heinzel signed the lease on the upper floor in April of 2015 and before long it was christened “The Studio.”

The Studio became the group’s new hangout and eventually they used the space to mount a pair of multimedia events featuring art, video and music by Heinzel, Peebles, Isham and others, but this experience proved less than ideal. The first event in July 2015 had a good turnout but the small space became oppressively hot and crowded; a second, less aggressively promoted event failed to attract much of a crowd at all. “We realized how much work it was to put these shows on while the end result was totally reliant on people showing up,” says Peebles. “But we also couldn’t have too many people show up,” adds Isham.

It was at this point that Heinzel first pitched the idea of investing the group’s creative energies into making a public access format show for the web, which would allow audiences to experience the trio’s work at their convenience. The idea was appealing in a number of ways. “It enforced deadlines, it enforced content and length and it gave us structure,” says Peebles. “Within five minutes Dave had outlined on a big poster board what our show could be. Every minute was accounted for.”

“It seemed obvious to me that we were either going to fail miserably and quickly or it was going to be beautiful,” says Heinzel.

The humorous personal dynamic between Isham and Peebles was apparent to the two as far back as the 2007 Skyler Duncan video. Peebles’ onscreen persona is along the lines of a delusional egomaniac, constantly using his position as putative host of “The Studio Show” to assert his dominance over the proceedings in general and Isham in particular. As a counterpoint, Isham’s persona is an earnest, deceptively wide-eyed naïf who, far from being shunted aside, manages to come out on top in most scenarios, much to Peebles’ comedic chagrin. “We all naturally fell into the roles that we’re comfortable with,” says Isham. “From there it became a matter of improvising and finding new ways to express it.”

Heinzel, who has a day job doing video and web production for the Consortium for Educational Change, chose to remain behind the scenes for “The Studio Show” for a few reasons, not least that he finds his creative partners too funny to perform with. “I can’t do back-and-forth with these guys,” he says. “I have the lowest tolerance for breaking character and laughing. I even have a hard time not laughing from behind the camera sometimes.” Heinzel’s tendency to crack up has nonetheless proven useful.

“When Dave laughs we know we’re on the right track,” says Isham.

Peebles agrees. “Then we just shoot that part again so we don’t have laughter on there. We’re having so much fun with each other because there’s this level of respect between us all and my favorite thing is there’s no ego involved.”

The irony of this observation is not lost on the team, considering that much of the show’s humor is based in the fictional one-sided ego battle waged between the Peebles and Isham characters.

“The notion of a big ego itself is so laughable among us,” says Isham, who credits the recently deceased Garry Shandling’s award-winning ’90s HBO comedy series “The Larry Sanders Show” as a prime influence. “There’s always something funny about two people cluelessly getting wrapped into conflict.”

Comedy is only part of the reason “The Studio Show” exists. The program, described memorably by Isham in one episode as “something special and unique and heartfelt and community-oriented,” is indeed a one-of-a-kind showcase for the city of Springfield as a place where creativity flourishes. The first several episodes feature interviews with a variety of area artists, including painters Jeff Williams and Amanda Greive, sculptor Michael Dunbar, cartoonist Brett James Freeman and poet Shatriya Smith. In addition, musical guests have included regional talent ranging from the close-harmony folk-pop of the Deep Hollow to the raw garage rock of SAP to the hip-hop stylings of Deezy Da Paperboy.

Finding an approach to interviewing artists provided some conceptual challenges. “It had to be something that had not been done, a way to talk about someone’s work that’s not sterile and stiff,” says Peebles.

“Otherwise it gets stuffy and just too formal,” says Isham.

Their first such interview was with painter-musician Jeff Williams who had brought a variety of canvases to the studio which he proceeded to line up along the walls of The Studio before the interview began. When the time came, Peebles followed Williams around on a literal art-crawl with both men on all fours, scrambling along the perimeter of the space and stopping briefly to discuss each painting. This whimsical approach came to define the Studio Show’s artist segments, which have also included a comic book-reading session conducted while sprawled out on a rug and an “art search” with the artist’s work hidden in various places around the set.

"It’s a celebration of creativity,” says Peebles of the show. “It is so important that we treat all of the artists and the musicians with an exalted approach. The only people we’re ever making fun of are ourselves. We’re the joke and they’re the focus.”

“I’m pretty cynical in nature,” says Heinzel. “I don’t like that about myself and I have to consciously turn it off. I don’t like anything to be cynical on the show and I don’t think it is.”

As the first season moves along, it becomes more visually inventive, an effect made all the more dramatic by the humble visual template (chair, couch, brick walls, minimal lighting). Episode nine opens with a tongue-in-cheek pastiche of blockbuster action movies which climaxes with a breathtaking aerial shot of the city which is as impactful as it is unexpected. An upcoming episode will feature an ambitiously staged rooftop concert in the mode of The Beatles’ Let It Be.

Online viewership of “Studio Show” episodes is growing, with episodes continually garnering new views. For instance, episode one, posted in December 2015, had received 1,123 views as of this writing, with more recent episodes gaining new viewers daily.

“My expectation for what kind of viewership and reach we would have was very modest for this thing,” acknowledges Peebles, citing as a model the current hit Comedy Central show “Broad City,” which started its life as a web series before being developed for cable after being discovered by Amy Poehler. “I was reading an interview about how stoked they were if they got 250 views each week and we’ve reached and exceeded those numbers already.”

The fact that “Studio Show” episodes are 30 minutes long makes them less than ideal for spontaneous clicks. “You have to plan to watch it,” Peebles admits. “It’s a slow burn kind of a thing.” They have started editing clips from the shows for posting on social media in order to attract more casual viewers.

It’s clear that the essential ingredient for “The Studio Show” is the mutual admiration and affection between its creators.

“Dave will never want to toot his own horn,” says Isham of Heinzel, who studied graphic design at Illinois State University, “but the show wouldn’t be what it is without his touch, his vision, his eye, his editing skills, everything he’s learned and been studying for 15 years. Arlin and I trust Dave implicitly, unconditionally. We know that he’s not going to let us do something that doesn’t play.”

“Dave’s got the brain of a director, the eye of a photographer, the heart of a writer and the balls of a bull,” says Peebles. “And that’s why we trust him.”

With production on the 12-episode first season of “The Studio Show” complete (the last two episodes are still to be uploaded over the next few weeks), the question of what comes next is inevitable.

“We’d like to take it up a level,” says Peebles, who also does video and online training development for the Springfield-based Illinois Principals Association.

“My biggest fear is that it just falls apart and we go back to seeing each other once a month,” says Heinzel. “But where do we want this to go? Do we want it to keep being a hang-out thing, do we want to expand it geographically, do we want to turn it into something that could take us into something else?” Ideas have been pitched ranging from a completely revamped format to a fully scripted web series or even a feature film. Regardless, the possibilities are exciting.

“It feels good to realize, wow, somebody might want to see what we’re doing next,” says Peebles.

“We had no concept of trying to get this beyond just our circle of friends,” continues Isham, who when not co-hosting the show does tarot and reiki therapy at Trailhead Healing Arts Center. “It’s taken on its own momentum.”

“The thing I’m happiest with has been our ability to bring in a diverse group of people,” says Heinzel. “We come from a group of white males in our 30s and it’s very hard to reach outside of that group. But Springfield is a really vibrant community that actually has a diverse sense of identity. For me, one of the biggest things about this show is to point out that Springfield is better than people here tend to think it is.”

“We were just hanging out on Monday nights,” says Isham. “Now we’re still doing that and we’re closer than ever. But we also have all these new people that we’re meeting and we’re making all these really great connections. I think if Springfield has a major fault, it’s that it can be so easy to get in your own little world and then never break out of it and never have anything penetrate that world to pull you out. And through making the show, we’ve done both. I would love to keep fostering the sense that Springfield can be a really beautiful community if we all start engaging with each other.”