The osprey is a large black and white raptor that feeds on fish. From early spring through late summer, osprey are seen occasionally at Lake Springfield gliding through the air and plunging into the water to catch fish in their talons. Lincoln Memorial Garden director Joel Horwedel is hoping that a pair will decide to stay and breed. To entice them to do so, Lincoln Memorial Garden recently partnered with the Illinois Department of Natural Resources (IDNR) and the city of Springfield to install a nesting platform on the shore of Lake Springfield. Most osprey are migratory birds, traveling as far as South America to winter, with a strong tendency to return to nesting areas to breed.

The artificial nesting platform soars 48 feet high and was installed Nov. 13 at the highest spot in Lincoln Memorial Garden, near the Lincoln Council Ring in a prairie overlooking the lake. It is the only osprey nesting platform on Lake Springfield, with the next closest at Lake Sangchris. The platform was constructed by IDNR wildlife biologist Pat McDonald, and the pole was donated and erected by the city of Springfield/City Water Light and Power. IDNR allocated federal funds available to the state through the Pittman-Robertson Federal Aid in Wildlife Restoration Act to support this project. 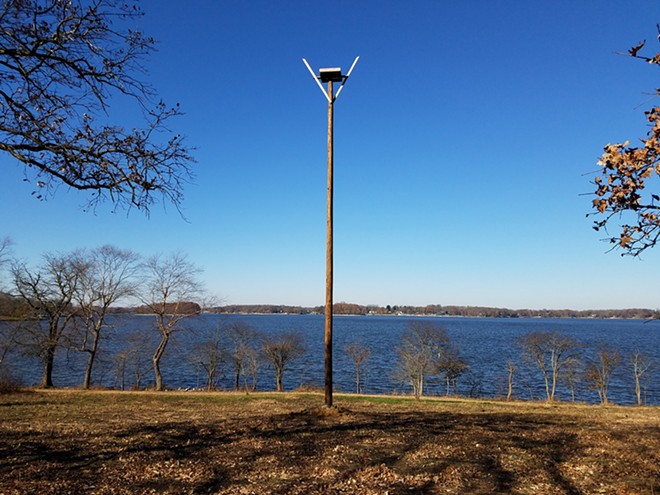 Osprey were once abundant, but suffered declines caused by the pesticide DDT. Populations have increased following the 1972 ban on DDT. The osprey was on the Illinois endangered species list since 1977, and in May 2020 was reclassified as "threatened." IDNR has been leading projects to establish a self-sustaining population of breeding pairs in the state through the release of chicks brought in from other states which have large populations and establishing artificial nesting platforms in areas with suitable habitat. Lincoln Memorial Garden is an ideal location for a nesting platform.

It was a beautiful day when the platform was installed. "As we were erecting the pole, a juvenile bald eagle soared over our heads for several minutes," said Horwedel.  "Thanks to conservation efforts, the bald eagle has gone from a listed to a de-listed threatened species, and our hope is that someday the same can be said of the osprey."

Karen Ackerman Witter has a master's degree in ecology. As a former employee of the Illinois Department of Natural Resources and longtime member of Lincoln Memorial Garden, she looks forward to seeing osprey nesting at Lake Springfield.