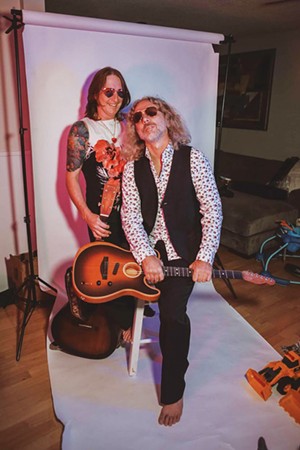 As we prepare to be thankful officially next week (but it's a good idea to keep some thankfulness on hand all the time), I see all kinds of fun stuff happening around our fair city this weekend and into the days ahead. In remembering the short work week a-coming and the early issue of Illinois Times next Wednesday, be sure to take a good gander at the Night Before Thanksgiving shows happening at the end of this week's music listings. That sounds confusing, but I know you know what I mean, so let's see what's up and going down in the next few days.

Thursday still gives us something to hang our hats on (next week will be a different story) as I see Springpatch Serenade dropping back into the Curve Inn again, Joel Gragg & the Filaments lighting up Whiskey Jack's, the return of Venezuelan composer and performer Maria Alejandra Rodriquez to the Pharmacy's Art of Jazz series, hosted by Jose Gobbo, and an illustrious open mic at Buzz Bomb hosted by the one-and-only Joel Honey.

If you can take in the Friday night sights, be sure to drop by the Blue Grouch for the For the Love of Lennon show, paying respects to the late Sam Draper as the group covers The Beatles to the extreme.

Check out Thomas J. Beverly's 2nd Annual Friendsgiving Jam at the Butternut Hut (go Tommy), where there's a back line of amps and drums provided and music will be made by an assortment of friendly musicians who are indeed friends interested in musical fellowship.

Other Friday events include, Not Petty breaking it down at Jamie's Route 66 bar on South Sixth, the Maria Rodriguez Quartet at Boones Friday Night Jazz and Blue Note Quintet jazzing up Lime Street.

For some big guns going off, The Steel Woods (yes, those guys) kick it at Boondocks, Ray Scott drifts into the Backroom Lounge in Riverton and Big Love, a Fleetwood Mac tribute group is "rumored" to be at Danenbergers. Then, for more in store than ever before, Exit 52 ramps it up at Weebles, as Off the Wall runs into the Curve Inn, while the Jay Larson Band gets cornered at George Ranks.

A neat event is happening Friday evening out at the UIS Studio Theatre when Black Futurez: Mixtape: Side 1 brings together "emerging Black artists" with host Reggie Guyton (current Our Stage / Our Voices artist-in-residence) to perform spoken word and music pieces and discuss the process involved in what they are describing as "a compilation of ideas and emotions from Black youth living through current times," and that's an experience you won't want to miss.

Here's a plug for our Sangamon Songs: A Musical Play making it to downtown Springfield with performances Friday, Saturday and Sunday at the Hoogland's Peggy Ryder Theater. Along with me, John Irwin and Owen Irwin, Polly Launay will join us on violin for the Saturday night show. Hurrah!

Here's a wonderful way to spend your Saturday morning (10 a.m.-1 p.m., actually) when Randy Erwin (no relation!) sings a delightful selection of songs from previous centuries at Stella Coffee & Tea on West Governor using a variety of acoustic instruments.

Let's stay on the move for the great Johnny Rawls Monday at the Alamo. He's a real-deal treasure chest of music and experience that to see is to know.

See you next week for our Thanksgiving Eve roundup and more.