Making music on the fly 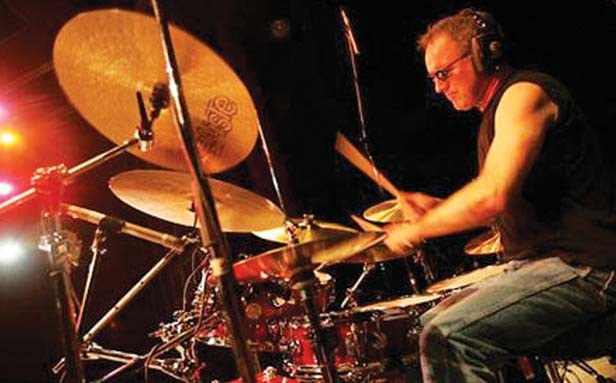 On Saturday the Hoogland Center for the Arts hosts David Cain & Senses featuring percussionist Paul Wertico in a program called A Feast for the Senses. The dinner features Chef Shaun Moore with Arena Catering and the music puts Wertico, Cain and the other musicians in a creative place of on-the-spot music making. I don’t get out much so I had never heard of the 7-time Grammy Award-winning drummer (for his work with Pat Metheny Group) and did some research before heading over to Cain’s Umedia in the art center for a talk with David and Paul.

A quick overview shows the stunning amount of good stuff Wertico has accomplished as an internationally renowned musician living in Chicago. His 2010 recording received 4 1/2 stars (yes, out of 5) in jazz music’s famous Downbeat magazine, he is a reader poll winner in Modern Drummer and DRUM! magazines and an assistant professor at Chicago’s Roosevelt University where he resides as head of Jazz and Contemporary Music Studies. Cain, who has been twice nominated on the early balloting for a Grammy, speaks highly of his newfound comrade.

“He’s a great guy and really passionate about making music,” says Cain. “Once I was thinking about who my favorite drummer to collaborate with would be, so I reached out to Paul and he got right back to me.”

After some online communications early in 2012, Wertico asked Cain to collaborate on a program called Vivid he was producing at the Auditorium Theater through his Roosevelt University position.  They immediately bonded through a mutual respect for improvisation and creativity.

“Without Dave’s input on the Vivid program there would have been a huge gap in what I saw as my final vision,” said Wertico. “We just worked together so well and he’s a great guy, I thought, Jeez, we got to keep this going.”

When I asked for an idea of how the music would go Saturday, both guys laughed a bit before getting down to the tricky task of explaining the ins and outs of making completely improvisational music.

“The amazing thing is that Paul and I are like kindred spirits and we have all these synchronicities in our lives. I think that common thread of embracing our humanity, our soulfulness, our artistic expressions . . . it just comes out,” explains Cain. “We have all these different instruments on stage, including a kitchen sink, plus an improvisational dancer. It’s just that excitement of all these different stimuli going at once.”

“The main thing is not to worry that the show will be a mess. It’s like cooking, I don’t use books – I like to improvise, but I know enough not to put things like cornflakes and spaghetti together with maple syrup and olive oil,” mused Wertico. “I’ve done things like this my whole life. When you work with people who are good at this, you make something out of nothing that’s totally unique and will never happen again. That’s what we do.”

Wertico and Cain continued the discussion of making music on the fly and how exciting and rewarding improvisation can be for both the audience and the players. Comparisons to painting came up and the idea of using instruments as brushes to “paint” impressions of music became a vivid and strong image in explaining the feelings.

“The art of making something out of nothing is what we do. People can expect the beauty of chaos where anything goes,” said Wertico. “It’s so great to bring something beautiful out of humanity through playing music. You can see it in the eyes of listeners. I guess that’s why we do it.”