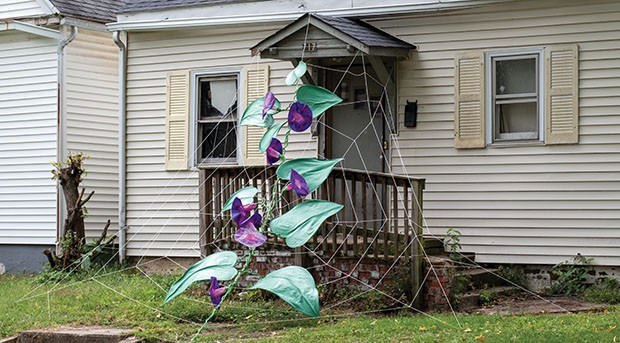 A giant paper spiderweb containing an oversized morning glory flower covering the front of an abandoned house. A series of synchronized video monitors flashing various leisure activity options from an upper porch. A palm frond waving maniacally at passersby from a storefront window. A series of bright pink lawn ornaments made out of thrift store knickknacks.

These striking and unusual images all indicate that the Terrain Biennial has once again descended on Springfield’s Enos Park neighborhood. Over the next six weeks, visitors to the residential area – which borders the medical district and contains the Springfield Art Association’s main campus – can either seek out or simply happen upon the work of 20 artists from all over the Midwest, including a few creators from Springfield. The installations have been incorporated into already existing structures, with the permission of the property owners, making Enos Park itself into a functioning, temporary art gallery through Nov. 17.
The Terrain Biennial is a program presented by Terrain Exhibitions,  newly established as a nonprofit operating out of Oak Park, Illinois. Every other year (Enos Park also participated in 2017) artists are invited to work collaboratively with host sites, simultaneously, in multiple locations around the world. Artists repurpose private, residential structures into public art spaces for the duration of the biennial. According to Jeff Robinson, director of the Visual Arts Gallery at University of Illinois Springfield and co-organizer of the Enos Park biennial, there are more than 200 sites and over 250 artists participating across 10 states in four countries for the 2019 biennial.

“The Terrain Biennial is often billed as an international art festival,” said co-organizer Allison Lacher, who manages the UIS Gallery.  “The work is commonly site-specific so artists are making work for the site where it will be exhibited.”

This past Saturday, the vibe in Enos Park was part art opening, part block party, as area art appreciators and the just plain curious wandered around checking out the work and the neighborhood, with the added treat of various musicians performing live at selected sites.

Rachel Youn’s “Courtship,” located in a storefront window, consists of a giant, motion-activated palm frond which waves wildly when triggered. Two text-based installations – “Fade Away” by Edo Rosenblith and “Don’t Make Me Laugh” by Yoswshien Kuo – seem to be engaging in a silent shouting match across Fifth Street, although the pieces were made independently.

A pair of pieces create evocative and ghost-like imagery. “Trapping as Profession” – a   collaboration between Guen Montgomery of Urbana-Champaign and Emily Bivens of Knoxville, Tennessee – uses projections to alternate between landscape shots and detailed imagery of “women setting and triggering spring traps,” as described in an artists statement. The other, “Invisible Mother” by Champaign’s Melissa Pokorny, consists of colorful but eerie figures standing in front of Edwards Place in a spooky evocation of Victorian-era photographic techniques.

“It brings art to where people live,” said Robinson of the biennial, pointing out that typically, in order to see art, people need to make the effort to go to a gallery or museum, but with the Terrain Biennial, the art is right there in the neighborhood, 24 hours a day.

“Museums and galleries are venues which can intimidate a potential audience,” added Lacher, “but when we place the work in communities it can be disarming.”

The Terrain Biennial will remain on display in Enos Park until Saturday, Nov. 16. Neighborhood maps will available inside the Springfield Art Association, 700 N. Fourth St. 9 a.m.-5 p.m. Mon.-Fri., 10 a.m.-3 p.m. Sat.)  while supplies last. There is also an interactive map available at https://terrainexhibitions.org/interactive-map. Metal stands containing descriptions and artist biographies are on display in front of each installation. 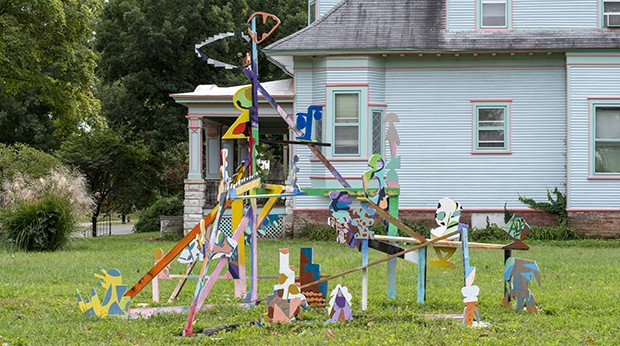