Stovepipe apologists should get real 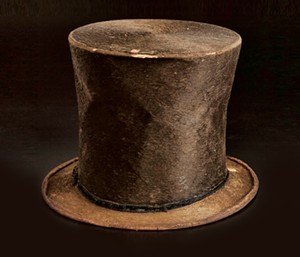 Folks who bought a hat that wouldn't draw an offer on Pawn Stars still don't get it.

They're reluctant to admit that the stovepipe likely never graced Abraham Lincoln's head. For years, the Abraham Lincoln Presidential Library and Museum acted more like the hat's pimp than a museum.


Chicago journalist Dave McKinney first revealed suspect provenance nearly eight years ago. State historian Samuel Wheeler started research in 2018 and was told three times to write up findings before he finally pulled the trigger in December. The governor's office ordered him to write a report or research notes would be turned over to the next person who made a records request.


Wheeler's report details foolishness in purchasing the hat and other stuff from Louise Taper, a Beverly Hills denizen and member of the ALPLM foundation board that gave her $23 million in borrowed money. Abe World, with former state historian Thomas Schwartz starring as artifact expert, relied on a 1958 affidavit and nothing else in accepting the hat as authentic. Schwartz, according to Wheeler, considered Taper a friend, just as his predecessor, James Hickey, was a friend.


Decades after finding the hat in an antique store, Hickey sold it to Taper. At the time, she, with Hickey as adviser (he'd retired as state Lincoln curator shortly after signing a document barring him from appraising artifacts and buying and selling them on the side), was on a spending bender. "I was obsessed with it," she recalled during a 2009 ALPLM panel discussion.


Taper really likes Lincoln – she told her audience that she owns his chamber pot, and Mary Todd's, too. "When I had Lincoln's hat, it just sat out in this cabinet – I was so thrilled," Taper said. "Then I saw an auction catalogue that had Franklin Pierce's hat. Franklin Pierce? It's a hat, it's a presidential hat, so I bought it. Then, all of a sudden, I started buying these hats, and when I was with the president, I asked him for a hat, and now I have 14 presidential hats. I just bought, recently, Ulysses Grant's hat."


Taper said her Lincoln obsession accelerated after a visit to Springfield. "Then I met James Hickey, and the rest is history," she said in 2009. When Schwartz replaced Hickey as curator, the state's Lincoln collection was neither organized nor indexed, Wheeler reports, but the former curator helped put things in order. Hickey, also, wrote exhibit labels for the hat and other items from his collection that appeared in a 1988 show along with state-owned relics. "He had the institutional memory, I did not," Schwartz explained to Wheeler.


The hat was appraised at $15,000 in 1988, two years before Taper bought it. Wheeler couldn't determine who set the value – it might have been Hickey, Schwartz told him, or perhaps Ralph Newman, owner of the Lincoln Book Shop in Chicago. "There is some evidence to suggest Hickey was working with Newman to find a buyer for the stovepipe hat," Wheeler writes.


With facts like this, you'd think Abe World would scream "Let's get to the bottom of this!" But the ALPLM and its foundation has plodded since shaky provenance became public while Pat Quinn was governor.


Contrary to ALPLM assertions, the hat, Wheeler found, doesn't appear to be Lincoln's size, nor is there proof that it came from a Springfield shop. Wheeler found no opening in the inner hat band suggesting that Lincoln had stored documents inside, as the museum had claimed after suspect provenance was revealed.


In 2013, James Cornelius, then Lincoln curator, rejected DNA testing. "This is a dead issue," he told the board of the Illinois Historic Preservation Agency that oversaw Abe World. "Dandruff, bone, hair – forget it. It's not there." Board chairwoman Sunny Fischer sided with Cornelius, saying that she believed in the hat, even though the museum had altered the tale of Lincoln giving the hat to a political supporter while president when no evidence could be found that the recipient had traveled to Washington. "That's history," Fischer shrugged. "We accept it." Quietly, Cornelius later escorted FBI agents into Abe World to conduct DNA tests.


The hat still hasn't been examined by textile experts to determine whether material and fashion is from Lincoln's era. While Wheeler's measurements show the hat isn't Lincoln's size, the historian says he can't be sure, since he'd never before measured a hat. Only after Wheeler turned in a draft of his report did the foundation allow him to examine 1,500 pages of emails and other documents surrounding the Taper purchase on the condition that he do it in foundation offices and make no copies – initially, he was given one day.


The Chicago Tribune was upbeat in an editorial about Wheeler's report: "The good news is that there seems to be no question about the hundreds of other items." The foundation defended the hat purchase in a subsequent letter to the editor. Wheeler hadn't shown that the hat didn't belong to Lincoln, foundation officials observed. True. He just didn't find any credible evidence that it did. No one mentioned provenance questions that have been raised about other items in the Taper sale, notably a clock said to have come from Lincoln's law office and a fan Mary Todd Lincoln allegedly carried to Ford's Theater.


As I write this, a new ALPLM board is scheduled to discuss Wheeler's report at a 90-minute working lunch that includes four other subjects. The next step is obvious: Call in a textile expert. And consider what Taper did when she once bought a Lincoln note.

"So, I panicked. I called them up and said 'This isn't good, this isn't real, and I want my money back.' I was lucky, they said 'Send it back and we'll give you your money back.' I sent it back, thinking 'I'm never going to get my money.' I got it.


"I was real careful after that."