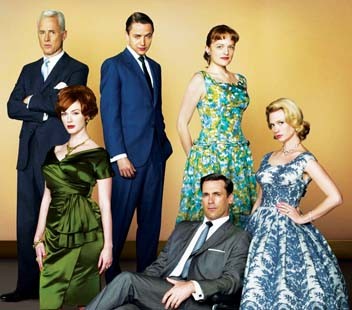 The cast of “Mad Men.” An encore of season three is scheduled to be shown on Sunday nights beginning March 21 on the AMC cable channel.

From the bored housewife and the determined workingwoman to the philandering businessman, the television drama “Mad Men” explores a cast of 1960s archetypal characters, and displays them warts and all.

This Friday, Feb. 19, the wildly popular show will serve as a catalyst to look back at the pivotal decade during the symposium, “Mad World: Sex, Politics, Style and the 1960s” at the University of Illinois Urbana-Champaign.

The U of I’s Unit for Criticism and Interpretive Theory hosts the series of panel discussions and keynote lectures looking at issues such as gender, style, civil rights and sexual identity.

“Mad Men,” set to start its fourth season on the AMC cable channel, chronicles the world of Don Draper – a mysterious creative director for the New York City advertising firm Sterling Cooper – during the birth of television advertisements and the era of political and social change.

Lauren Goodlad, an English professor and the director for the Unit for Criticism and Interpretive Theory, wrote the essay — “Why We Love ‘Mad Men’ for the Chronicle of Higher Education — and that led to the unit organizing a symposium.

“I was completely taken aback by the impact that the show seemed to be having on my friends; they were expressing so much enthusiasm for it,” Goodlad says. She asked herself why people in their 30s and 40s, who may not remember the decade, would be so interested in the show.

The symposium will offer the opportunity to not only answer that question, but also to dig deeper into the 1960s, Goodlad says.

The symposium features speakers from U of I and around the country, including a panel discussion with Clarence Lang from U of I, who will present “From the Mad Margins: Approaching the Civil Rights Frontier from the Early 1960s,” and Alexander Doty from Indiana University who will discuss the topic, “The Homosexual and the Single Girl.” Leslie J. Reagan from U of I will contribute “After the Sex: A Feminist Reading of Gender and History in ‘Mad Men.’ ”

“I think [‘Mad Men’] provides the narrative of some very archetypal characters whose stories show the embeddedness in history on such a deep level — a window into a whole historical situation that was playing itself out in the 1960s,” Goodlad says.

Archetypal characters such as Peggy Olson, a young copywriter working her way through the male-dominated world of advertising, a character, Goodlad says, she thinks is important for a lot of viewers of today.

“She represents a young woman who is trying to carve out an identity and purpose for herself outside of marriage and children alone,” Goodlad says.

Peggy Olson’s character is one Goodlad herself has something in common with.  Goodlad spent time as a copywriter in New York City, and some things have changed since the days of the early 1960s portrayed on “Mad Men.”

“My creative director was a very openly gay man, and the head copywriter — who I directly reported to — was a very accomplished and glamorous woman.” According to Goodlad, nobody remotely like Don Draper was in sight, for better and worse.