Reaching out to help military families, or other neighbors, pays much more than it costs

Military families often suffer from isolation, and the problem is even more pervasive at the holidays. Here’s how one couple went above and beyond to provide love, peace of mind and a few good meals to a military family in need of support.

When Army Captain Chase Burnett was relocated to Fort Campbell in Kentucky, he and his wife, Ashley, moved to nearby Clarksville, Tennessee, with a two-week-old baby and a toddler in tow.

“Moving is a big challenge,” says Ashley Burnett. “You feel all alone, like you’re living in a whole new world. It’s not just the not knowing anyone. It’s little things, too. What dentist should I go to? Where should I shop? Where do you get your hair done?”

She says it’s a challenge military families endure over and over again due to constant relocation and deployments.

“One of the biggest struggles is that when we relocate, 99 percent of the time it’s not close to immediate family,” Chase Burnett says. “I think being a military family, you to try live as normal of a life as possible, but the reality is we go through lots of things every day that other people don’t go through,” Ashley says. “Particularly long periods of time spent apart. With 9-month deployments, it’s difficult to give our kids (now ages 4 and 1) as normal a life as possible, especially when there’s only one parent at home and the other is across the world.”

Enter Ken and Judy Osborne, a retired couple living next door to the Burnetts.

“In the cluster where we live, everyone around us is military,” says Judy Osborne. “When we moved to Clarksville, I became the one-person welcoming committee to our cluster.”

Ken served in the U.S. Air Force for eight years, and according to Judy, wherever they were stationed, they lived on base.

“You had the support you needed because everyone was in your position. Now 77 percent of military live in the community. To lend support to those that have the need is really important to me,” she says.

Both Ken and Judy grew up in communities in which neighbors were friends, and everyone had an open-door policy for neighborhood kids, which is something they agreed was important to the health of their community.

“We grew up in a community that cared about you,” Judy says.

The friendship between the two families started on the day the moving truck pulled into Chase and Ashley’s driveway. Judy showed up with sandwiches, a loaf of homemade bread, and disposable plates.

“She dropped them off and gave us space – she said she knew we were busy, but she let us know that if we needed anything, she and Ken were happy to help,” Ashley says. “I didn’t realize how big a part of our lives they would become.”

Shortly after moving, the Burnetts were notified Chase was facing a nine-month deployment to Iraq. It was during this time that Ken and Judy became a surrogate family to the Burnetts.

“It was overwhelming with a new baby in a new place by myself. You kind of feel like you’re carrying the weight of the world on your shoulders,” Ashley says. “Ken and Judy helped me carry the load. I have people there who care for me and love my kids as if they are their own grandkids.”

During Chase’s deployment, Judy provided a home-cooked meal at least once a week, and she and Ken both helped with household tasks, yard work and child care, which enabled Ashley to continue working full time. Ken even saved a dying “love tree,” which Chase planted with his children prior to deployment.

“When we planted the tree, we told them in the spring it would get leaves, in summer it would bloom and when the leaves fell in the fall, that’s when daddy would be home,” Ashley says. “About mid-summer, I was so flustered. I thought I’d killed our love tree. It was starting to lose leaves and I couldn’t believe I’d allowed the tree to die. Ken went over while I was at work and he watered it, fertilized it and ultimately saved it. It was a big deal to us that the tree didn’t die.”

In March, Ken and Judy Osborne were awarded the Blue Star Neighbors Award by Blue Star CEO Kathy Roth-Douquet, who says, “A simple formula for creating relationships is people plus people over time, plus goodwill, equals a relationship and, in a lar
It was a patriotic deed, according to Chase Burnett, because Ken and Judy allowed him to serve his country without having to worry about life back home.

“I can’t even put into words the impact Ken and Judy had on our family and my ability to focus on mission,” Chase Burnett says. “There were a lot of things I didn’t get to do as husband or father before I left, both around the house and with my kids, but having Ken and Judy I had people that could act in my stead. Obviously the smallest act of generosity goes an extremely long way.”

Ken Osborne says it’s something everyone should do, whether or not your neighbors are a military family.

“You need to get out of your house and knock on some doors,” he says. “Don’t just go to work, come home, and do the same thing over and over. You have to go out, knock on the door and see if anyone needs help. Invite them into your life.”

On March 22, 2017, Ken and Judy Osborne were awarded the Blue Star Neighbors Award for the extraordinary generosity and service they provide the Burnetts. The annual award is presented by Blue Star Families, a nonprofit organization founded by a group of military spouses that provides career development, caregiving and research on military family life to better understand and find solutions for today’s military families.

Blue Star Families’ CEO, Kathy Roth-Douquet, says military families often have trouble finding the support they need in large part due to the transient nature of the military. Ashley Burnett agrees, saying people sometimes are afraid to invest in friendships with military families because they know the relationship will be temporary.

Roth-Duque says the relationships you build with those in your community, military or not, can withstand time when you open up your life.

“A simple formula for creating relationships is people plus people over time, plus goodwill, equals a relationship and, in a larger sense, it creates community.”

For those who feel as though they have no time or nothing to give, any time and any act is a gift.

“We like to say that whatever it is you have to give, someone can be enriched by receiving,” Roth-Douquet says. “If you are a storyteller, you tell a story. If you have a snowplow, you plow someone’s driveway. If you love to cook, you cook a meal.”

Roth-Douquet also believes that fostering and nurturing community is more important than ever in today’s world.

“I think in so many ways, things that we learn in the military actually help the larger society. We are learning how much community becomes the medium through which people solve problems. We don’t necessarily want service providers to give us services. We don’t want to be the beneficiaries of resources. We want to be a person who gets help from another person.”

She says that when community members interact, it fosters goodwill, and over time that goodwill leads to a bond of trust. This trust helps information and ideas flow, and creates resilient people who are getting the most out of their lives.

“Everything is a life lesson. As our kids grow older, we’ll be able to use Ken and Judy as an example,” Chase Burnett says. “It shows our kids that it doesn’t have to be your family. Nobody goes through life alone. You rely on those friendships you form around you.”

“I think it’s important for everyone to know – it doesn’t matter who you’re around, taking the time to make relationships with your neighbors takes your quality of life from five to 500. We get fulfillment from this friendship that Ken and Judy will never understand. All of the families in our neighborhood that have relationships with them live a better life just because we know them. No matter who you are or where you come from, you can live a much better life if you reach out to the people around you.” 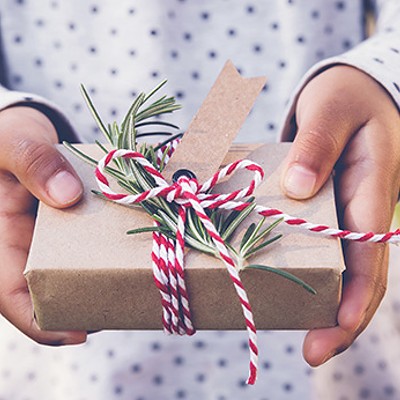 Politics with no parade