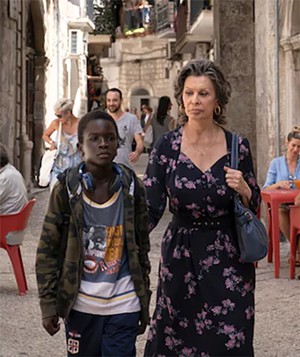 There's a tattered dignity about Madame Rosa. Life has been hard for her. Circumstances have forced her to compromise herself from time to time. As a survivor of the Nazi death camps, she's learned the hard way that living another day can come at a steep price. And she knows not to criticize anyone else regarding any decisions they make in leading their lives. Who is she to judge? She helps those in need when she can, likely because other kind souls helped her when she was in dire straits. She has gotten older and knows she may not have much time left. Yet, she continues to care for a pair of young boys whose mothers are in trouble, though she realizes she is slipping, that she can't remember things as she once did.

Madame Rosa is a role tailor-made for Sophia Loren, and in The Life Ahead, directed by her son, Edoardo Ponti, she's given the opportunity to remind us what a formidable presence she is on screen. She doesn't disappoint, bringing not only a sense of strength to the role but poignancy as well. Seeing the actress, her towering persona on full display, being chipped away at by the vagaries of dementia proves devastating, driving home the notion that no other actress would have been better suited for the part.

Oscar talk has already begun regarding Loren's work, and it's not empty hype. Here's hoping any awards conversation includes her young co-star Ibrahima Gueye, a 12-year-old actor who matches the veteran actress step for step. He brings a melancholy anger to the role of Momo, an abandoned child of the street who first meets Rosa when he steals her purse. When a kindly doctor ultimately brings the boy to her doorstep, asking her to take him in and care for him as she does two other children, she's justifiably aghast. A monthly stipend convinces her to take him on and any indication a reconciliation between them may be in the offing isn't readily apparent.

And while we know they will resolve their differences, the way in which this occurs never feels manipulative or maudlin. A remake of the 1977 feature Madame Rosa, which was based on the novel by Romain Gary, the screenplay by Ugo Chiti and Ponti treads lightly where sentiment is concerned. Rather, they concentrate on creating fully realized characters in Rosa and Momo, providing ample background for each, setting the foundation to justify their behavior, interactions and relationship. Ponti, Loren and Gueye all provide a deft touch in their respective arenas, each contributing to what ultimately proves to be an emotionally satisfying conclusion to a tale replete with tragedy and hope.

Ponti uses two powerful motifs throughout – a tattered rug and a lion. With the help of a kindly merchant, Momo learns of the importance of his Muslim faith, repairing a rug which has historical and religious significance. His awakening comes slowly, yet signifies the young man's realization that faith can provide him with a path to a better life, while the symbol of the lion is one of strength that appears on the carpet and in the rough sketches the young man continually works on.

That he comes to equate this symbol with Madame Rosa is a sign not simply of his respect for her but his growing awareness of what's to be valued in the world. The Life Ahead is buoyed by the two dynamic performances at its center, a masterful, subtle work that ensures Ponti can drive home his point without having to resort to cheap theatrics.