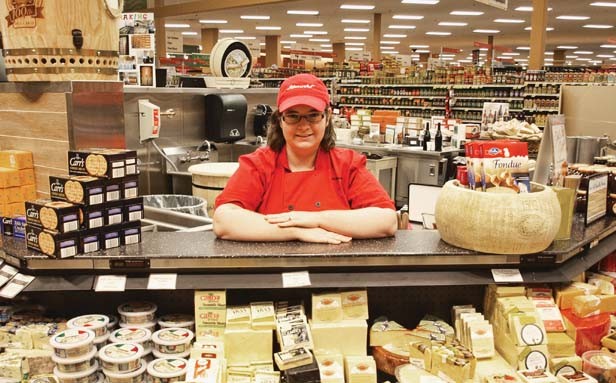 Her voice halted me in my tracks. Right in front of the Montvale Schnucks’ newly renovated and expanded specialty cheese display, I quit pushing my cart. Shamelessly eavesdropping, I cast periodic surreptitious glances toward the speaker behind the counter.

“This is Raclette. It’s from Switzerland and ….” A young Schnucks staffer was showing a piece of cheese to another employee. She continued, giving a concise and accurate description of Raclette, how it’s made, how it’s used and what to tell customers who ask about it. (Raclette, which is the name of both the cheese and its preparation, traditionally was set in front of a hearth fire; as the surface of the cheese melts, it’s repeatedly scraped off and eaten with small potatoes, other vegetables and cured meats. These days it’s most often prepared with tabletop broilers made specifically for Raclette. It’s a communal dish, as is its close cousin, cheese fondue.)

I’m not a cheese expert, but have been exploring the vast and delectable world of cheeses since my college days. When my husband and I were undergrads at the University of Illinois at Urbana-Champaign, there was a tiny specialty cheese shop close to the grocery where we shopped. Before long, a large portion of our meager food budget was dedicated to cheeses we hadn’t known existed.

Why was I so astonished? These days, most supermarkets in Springfield have at least a few specialty cheeses in their deli departments: some brie, fresh chèvre (goat cheese), Gorgonzola, etc. Unfortunately they’re usually indifferently packaged, handled and displayed without descriptions or information. A knowledgeable staffer to assist customers? Fuhgeddaboudit!

That’s not the case at Montvale Schnucks. Before the renovation, it had a better-than-average cheese counter. But now it’s on a level (albeit smaller) to those in upscale big city groceries such as Whole Foods – and Schnucks’ flagship store in the St. Louis-area Des Peres West County Mall has an entire room dedicated to cheese.

Leah Reel is the woman in charge of Montvale Schucks’ newly expanded number-and-variety of cheeses, and the one who stopped me in my tracks. A native of Pittsfield, Reel has been passionate about food and cooking since childhood. Initially Reel’s interest centered on baking, and she’d planned on a baking career when she enrolled in St. Louis’ L’Ecole Culinaire 90-week course after high school. It was her 2009 internship (something virtually all culinary schools require) at that recently opened Des Peres Schnucks that changed her course.

“I fell in love – I absolutely fell in love with cheese,” Reel told me. That love was not just about the cheeses themselves, it was also because of Diane Bruce, who managed the cheese section and was her immediate boss. “She was such a wonderful teacher. If there were any questions [from a customer] about some obscure cheese, even if she didn’t know the answer right away, she’d find out about it. If she wasn’t working and I had questions, she told me to call her anytime. I wanted to be like her. I do the same thing here in Springfield with the two people under me.

Reel’s cheese expertise hasn’t just come from a wonderful mentor. Schnucks has twice sent her on a five-day field trip to Wisconsin to not only tour artisanal cheese makers, but also to participate in the actual cheese making herself. “One of the best things about Schnucks is that they want to continually educate their employees so that they can educate the public,” Reel tells me. 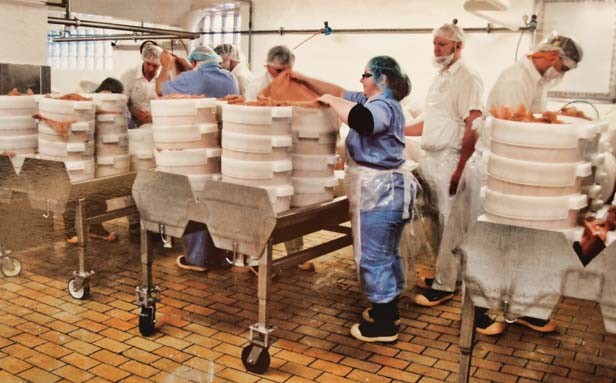 Reel’s opportunity to manage Montvale Schnucks’ newly expanded cheese department “just kind of fell into my lap,” she says. Moving from small-town Pittsfield had been a huge change for her and her then fiancée-now-husband Phillip, who also attended the L’Ecole Culinaire along with her.

“We were getting sick of living so far away from our folks,” Reel told me. “St. Louis is so big – we wanted to come home.” Ideally they would have liked to move back to Pittsfield, “But there just weren’t any opportunities for us there,” she says. Springfield – and Schnucks’ newly expanded cheese department – was the ideal solution: closer to home, yet large enough to have a market for specialty cheeses for her and other culinary possibilities for him.

Reel arrived at the Montvale Schnucks before the remodeling process was complete. “I wanted to get acquainted with the space and with Springfield,” she says. Reel does all the ordering of the cheeses, assisted by a thick book that lists the more than 200 cheeses sold by Schnucks stores, and she has the freedom to buy whatever cheeses she likes and thinks will sell. But even if a customer is interested in a cheese not listed in the book, Reel says she can call Schnucks’ buyer and probably get it. While preparing this article, she and I were chatting when someone came up and asked if they carried Baskeriu – something I’d never heard of. “I don’t have any now,” Reel told him. “But I can order it.” It turns out that Baskeriu is a sheep’s milk cheese from the Pyrenees, the mountainous region that forms a barrier between France and Spain. I’m anticipating Baskeriu soon.

Reel particularly enjoys doing individual orders of all kinds, especially if someone requests an artisanal cheese tray. “If somebody comes in and says, ‘I’m having a party,’ I’ll open up the whole case [of cheeses] so they can try them.”

Here are just a few cheeses in Montvale Schnucks’ display that are Reed’s favorites and/or my own:

Bleu D’Auvergne: A cheese from France’s Auvergne region (known primarily for its agricultural products), this is one of my all-time favorite blue cheeses, not only for its phenomenal taste, assertive but not overpowering with notes of toasted walnuts on the palate, but also because it’s reasonably priced compared to other blues such as Roquefort and Gorgonzola. Reel says it’s been one of her biggest sellers.

St. André: It’s made in the style of other French cheeses with a powdery white surface mold such as brie and Camembert. But St. André is more decadently rich on the tongue.

Barber’s 1833 Farmhouse Cheddar: This two-year-old English cheese has been made since – you guessed it! – 1833. One of Reel’s favorites, it’s a classic cheddar (which is actually a method rather than a specific cheese) that somehow manages to be both crumbly and creamy.

Spicy Gouda: Another of Reel’s favorites, this Missouri-made cheese contains both enough jalapeño and habañero peppers to give it a real kick without obliterating its Dutch-style flavor.

Comté: This is the French version of Switzerland’s Gruyère, my favorite Swiss cheese for both cooking and to eat out of hand. Reel usually has two Gruyères on hand: regular and cave-aged. Reel’s Comté is especially good because it’s been made with raw milk. The pasteurization process destroys taste components in milk as well as any harmful bacteria; fortunately any of those potentially harmful bacteria are also destroyed in cheeses that have been aged for more than six months.

Burrata: I almost hate to include this one; its supply is usually limited and so is not always available at Schnucks or elsewhere. When I find it, I’ll grab at least a couple, even though it’s highly perishable. Buttata is but one kind of fresh mozzarella that’s increasingly available in groceries. But the Burrata is my favorite: a globe of fresh mozzarella that encloses a creamier, semiliquid mozzarella center. It’s so delicately exquisite that it’s best eaten simply, in summer with fresh tomatoes and basil, or atop a bed of roasted peppers and onions the rest of the year. 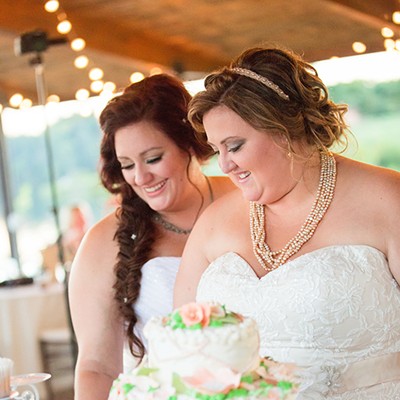