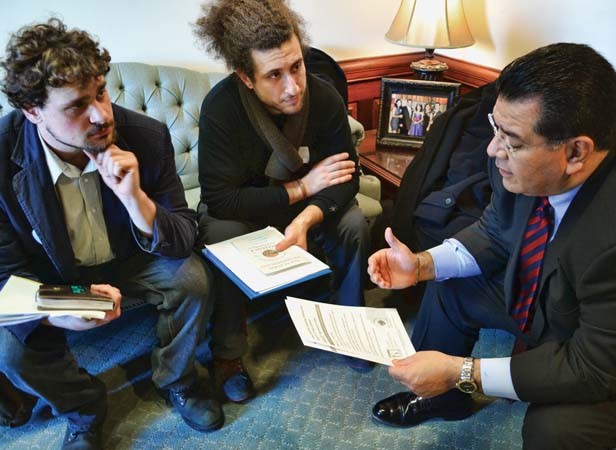 Consumers, farmers and other citizens traveled from across the state to Springfield last week to lobby for local food reforms.

As a part of Local Food Awareness Day, the group wanted to spread the word to legislators about issues on urban and rural composting. The day was sponsored by the Illinois Stewardship Alliance, a group that promotes the advocacy and development of legislation geared towards environmentally sustainable local food systems.

Wes King, policy director for the ISA, said the goal of Local Food Awareness Day was to create a presence around the concept of local food.

“We want to create a continuing presence and awareness that this is an important subject matter for economic reasons, public health reasons and the community,” he said.

For community gardens compost – organic matter that has decomposed and can be used as a natural fertilizer – is an intricate part of farming practices. Soil in large cities is usually contaminated by heavy metals and other pollutants, making it difficult to grow anything on it. Current state environmental laws prohibit farmers in urban areas from accepting compost from other farmers. On rural farms it is illegal to bring in any agricultural waste not produced on the farm.

King said the average farmer or gardener cannot afford to bring in fresh soil, and the use of compost allows them to create the healthy soil they need. The ISA is working to remove these regulations, making it easier for projects in both urban and rural areas to have high-quality compost.

For Alex Poltorak, founder and CEO of Urban Canopy, a rooftop farm in Chicago, the changes are crucial to the growth of his farm.

As an urban farmer, Poltorak said he has less soil to work with in the city. He said most urban farmers try to mimic nature’s natural process by using compost to create the fertile soil they need.

“That process right now is limited by state laws. To be able to compost, you need to be an eighth of a mile away from the nearest property line, which is difficult in densely populated areas like Chicago,” he said.

Poltorak was one of the citizens able to meet with a legislator. He and fellow Urban Canopy farmer Craig Sadur met with Sen. Martin Sandoval, D-Cicero.

Sandoval offered his support and advice to the group, saying he understood the importance of local food, and he is thinking about becoming a cosponsor of the urban compost bill.

Yet, he did say he thought their approach of sending citizen lobbyists to the Capitol might not have been the most effective or organized.

Lt. Gov. Sheila Simon spoke to those lobbying on Local Food Awareness Day. “It’s pretty easy to have an impact in Springfield and be heard by your legislators,” she said in an interview. “I’m glad that the folks involved in local food production are reaching out and making sure legislators know what a boost to the economy, food systems and health industry this could be.”

King said in general he was pleased with the outcome and glad to have everyone involved.

In the future when legislation comes up, he wants lawmakers to be able to identify with the local food concept, potentially creating interest and support.