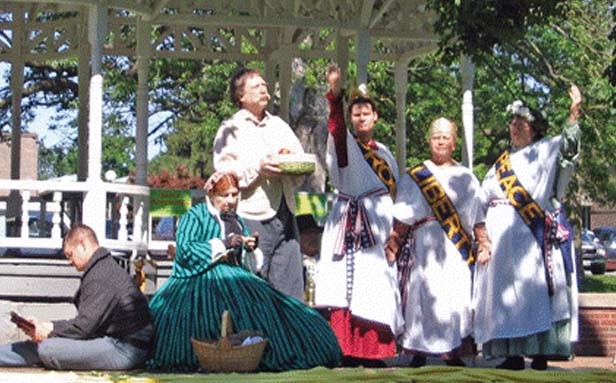 “The ladies of Springfield gave a grand Tableaux last week for the benefit of the Soldiers Aid Society,” Mercy Conkling wrote to her son in 1862. “It was a brilliant affair.  Mrs. Edwards told me it was decidedly the handsomest entertainment ever got up in this place.”

The tableau vivant, or “living picture,” was a popular form of parlor entertainment among the middle and upper classes in 19th century America. People donned costumes and staged real-life recreations of famous paintings, literary scenes and historical events.

Legend has it that the first tableau was contrived by a spendthrift young German nobleman who, in his father’s absence, sold a painting which was an important family heirloom. To cover his profligacy, he placed some of his friends behind the empty frame to imitate the missing picture and fool his father, who passed through the room without realizing the painting was gone.  In actuality, the tableau emerged as a dramatic art form on the European stage during the 18th century and spread to American parlors by the middle of the 19th century.

Creation of a tableau was approached less like the production of a play and more like the creation of a masterpiece painting.  An 1854 ladies’ advice manual stressed the importance of taking into account the effects of color contrast, light and shade, distance of the production from the audience, and the proper arrangement of figures.  “A want of attention to these minute points,” it cautioned, “will be sufficient to destroy the effect of the finest picture, even to those who are so unacquainted with art as to be incapable of explaining why they are dissatisfied, except by an involuntary liking or disliking of what they see.”

Proper attention to detail, however, could produce a most satisfying experience on the part of the participants.  “To the young, gifted with artistic feeling and a desire to excel in the highest walks of art, there are few things more likely to awaken the imagination, to inspire feelings of poetry and a knowledge of composition and grouping, than the exercise of this delightful recreation,” enthused the 1860 Book of Drawing-Room Plays and Evening Amusements.

Long before the MTV Generation’s attention span was whittled to a matter of seconds, our Victorian ancestors would spend weeks sewing costumes, assembling props, and setting the stage for these presentations.   The culmination of all this preparation was 30 climactic seconds, when the curtain would rise to reveal the participants holding their dramatic poses for the benefit of the spellbound audience. 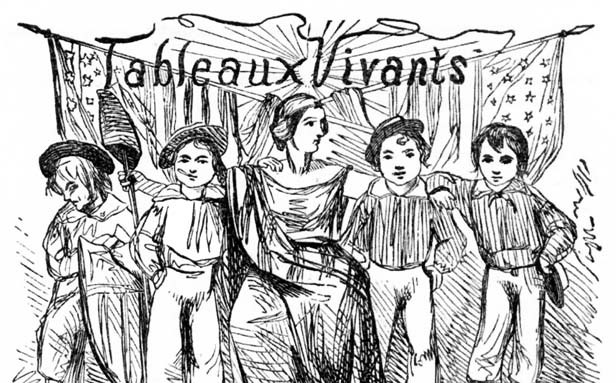 But oh, what a thirty seconds.  If executed successfully, the tableau’s portrayal of a single, melodramatic scene would inspire intense emotion in its viewers, who had been kept in a state of heightened suspense as they waited for the curtain to rise.  This emotional intensity could be maintained throughout an entire evening by planning a program of multiple scenes interspersed with music.

Such as was the case with the “grand Tableaux” Mercy Conkling enjoyed in 1862.   The event, which took place before a large and appreciative audience in Cook’s Hall, on the east side of the downtown square, included 15 tableaux on such reliably sentimental and melodramatic subjects as “The flower of the family,”  “Arrest of a Secessionist,” “The Madonna” and “Hospital Scene.” (The last was described by the newspaper as “well done, if some of the mourners did laugh to see a dead man move.”)  The entertainment was pronounced a “grand success,” and the endeavor raised $290 for the Soldiers’ Aid Society, a group of women who provided clothing, blankets, food and medical supplies to Civil War soldiers.

Twenty-first century Springfield citizens can still enjoy tableaux vivants, thanks to the modern incarnation of the Soldiers’ Aid Society, attached to the 114th Illinois Volunteer Infantry (Reactivated).  Using 19th-century source material, the SAS stages their “living pictures” during reenactment and living history events.  Their next performance of a tableau vivant will be at the Civil War Ice Cream Social at the Springfield Art Association on Saturday, July 14.  Performance times will be at approximately 2 and 2:30 pm.  The public is invited to enjoy the tableaux, free ice cream and Civil War dancing by the Springfield International Folk Dancers at this family-friendly event.

Erika Holst is curator of collections for the Springfield Art Association and author of Wicked Springfield: Crime, Corruption & Scandal During the Lincoln Era.