Seeking the scenic in central Illinois 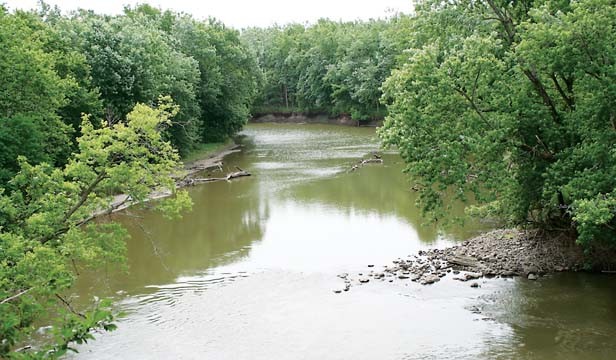 PHOTO BY DUAL FREQ
In 1925 planners proposed a scenic drive along the bluffs of the Sangamon River.

Dave Bakke, who usually observes the world from the upper slopes of the State Journal-Register, the other day looked at it from an even higher vantage point – the cenotaph that stands on the edge of the bluff above Chandlerville. The view down the Sangamon valley from that spot, he wrote, is the most beautiful view in central Illinois. Most Springfieldians who know that part of Cass County would agree, including me. My family farmed in that valley, and more than once I gazed from the bluff at what might have been my inheritance, indeed my fate, had not my father’s branch of the family chosen to become town people in the 1920s.

There is of course scenery in Illinois, mainly in those parts not buried in mud by the last glaciers. The unglaciated Driftless Area in extreme northwestern Illinois around Galena is one. Deep southern Illinois is another, as is Calhoun County, whose rocky ridge separates the lower Illinois River from the Mississippi River. Whatever good the glaciers did for the central Illinois farmer, however, they did no favors at all for the central Illinois sightseer. The sediments that buried the pre-glacial landscape hereabouts had roughly same effect on scenery that cheese sauce has on a horseshoe sandwich. There are no high spots, only places such as Chandlerville, where one can look down into the voids left after running water has carried away half a township of muds and gravels.

Yes, it lacks grandeur, but its rolling fields separated by hedgerows and wooded creek bottoms can be pretty in season. Something must be seen to be scenic, however, and seeing in a flat land requires the breadth of perspective that verticality affords. Reading the central Illinois landscape from ground level is like trying to read a book while peering at it from the edge of the page.

Getting away from it all is not nearly so invigorating as getting above it all. But how? Most of our hilltops are engineered – grain elevators, interstate overpasses, river bridges, buildings. When I was growing up in Springfield, I was forever trying to get high, seeking out places from which I could look down on other people. (My choice of adult occupation seems to have been ordained.) The confusions of the Midway were explained from the rooftop deck on the Exposition Building at the state fairgrounds. From bluffs above the lagoons in Lincoln and Washington parks in autumn I could see the parks as well as the leaves.

Then I moved to Portland, Ore., to a house atop a ridge of the Tualatin Mountains, known informally (and more accurately) as the West Hills. It was my first experience in living in three dimensions instead of two. The tourist who seeks out vistas and views takes pleasure in seeing different things. But living in the third dimension day to day, one begins to see familiar things differently. The views from my part of town took in a great working river, the road network that connects downtown to its hinterland, schools and parks. By seeing whole chunks of a city at once rather than one element at a time, the connectedness of a city’s parts is revealed. (Some of the streets in the West Hills snake up the hillsides, so that one can see in one glance where one is, and where one has been, and where one is going.) It’s like looking at a clock without a face, leaving the working innards exposed.

Whether this leads to understanding, much less wisdom, I will not here speculate. But there is something undeniably stimulating about seeing the parts in the whole rather than merely the parts of the whole. Sad then to recall that Springfield had a chance once to provide for itself views very like the one that moved Mr. Bakke – less dramatic perhaps, but also more convenient.

The first Springfield city plan, adopted in 1925, urged the stewards of the public good to appreciate the few scenic places as did exist, and do what was needed to secure their pleasures for the public’s use. The plan proposed construction of a scenic drive that would run from New Salem along the bluffs along the north banks of the Sangamon River, circling the north side of the city before turning south on the high land overlooking the Sugar Creek valley, opening to the hiker and the cyclist and the motorist broad vistas across bottomlands and wooded hillsides.

”Much of the scenery along this drive can hardly be surpassed in the Midwest,” wrote the plan’s author, Myron West. “Rarely is there an opportunity to build at little cost a really magnificent driveway.” Ah, yes, but there were prefabricated warehouses and trailer parks and interstate highways to be built, and first things must come first. Because of that, Springfieldians must travel to foreign parts, even if they are only as foreign as Cass County, to see where they live.