Summer's end brings a new play to Springfield with the premiere of The Baltimore Plot, by local writer and director John Woodruff, playing in the newly renovated Peggy Ryder Theatre at Hoogland Center for the Arts, Sept. 2-4, and produced by MASS Media.

Based on real characters and events, the play tells the almost-unbelievable story about an attempt to assassinate Abraham Lincoln on his way to his first inauguration in Washington.

Woodruff is a familiar face on area stages for many years, both in musicals and dramas. He has always had an affinity for history and has written other scripts from stories of America's past.

Not only are Abraham and Mary Lincoln featured, but we also follow detective Alan Pinkerton and staff (the first detectives?) as they discover the plot and try to convince the president-elect to change his travel plans. Another of Springfield's great talents, Dennis Rendleman, plays Pinkerton. A character many may not know is Pinkerton's assistant, Kate Warne, played by Cynthia Higginson. Warne herself is a fascinating character who has become more known in recent years after being discovered by researchers and scholars.

The plot revolves around a mysterious character named Cypriano Ferrandini (played by John Olmstead), who takes control of a band of southern sympathizers and turns them into would-be assassins.

Even if you've heard this story countless times (which goes with the territory of living in Lincoln country), this new production will bring it to new life and make you think. What makes the story so unbelievable is how all the characters and their plans are hatched and put into place. Timing and subterfuge were vital in Pinkerton's plan and had it not succeeded, we might never have had what many consider to be our greatest president.

Randy Duncan of Collinsville portrays Lincoln and Pam Brown once again plays Mary Lincoln, as she has played the role in several Lincoln-related plays here over the years. Duncan has also been portraying Lincoln in the area for several years and can be seen walking thru the Lincoln Home neighborhood and appearing at historic sites.

Woodruff has been working on this script for four years. After reading several articles and books on the subject, he began writing, but the more he researched, the more confused he became and stopped for a time. Several disagreements among historians about what actually happened also became a stumbling block.

"I realized the problem was there were so many stories and so many interesting characters that I was having a hard time figuring it out," says Woodruff. "Finally, last year I settled on a story line where the progress of the plotters in Baltimore parallels the progress of Lincoln's train as he traveled from Springfield to Washington through Baltimore."

He added that by choosing this route, he also had to drop some great characters along the way.

"All of the basic events are true," says Woodruff. "Of course, most of the dialogue is imagined. Being in Springfield, we have been very much aware of historical accuracy and have made as sure as we can that it is correct."

One of the disagreements among scholars over the years is the question about why Mary Lincoln stayed behind in Springfield and met Lincoln the next day in Indianapolis.

This was something Pam Brown had to think about as she portrays Mrs. Lincoln in this production.

"Mary loves, respects and worries about her husband during this trip to Washington," Pam Brown says. "In this play, May Lincoln reminds the audience that Lincoln was a husband and family man as much as a politician."

Historical theater is more prevalent in Springfield than in many cities, and our historic sites have featured theater as a part of interpreting history for visitors.

Woodruff's plays began with his adaptation of John Brown's Body by Stephen Vincent Benet. Written in the 1930s, the use of Benet's poetic language made it a good page-to-stage play.

His next play was Civil War Journeys, which was based on Woodruff's great-great-grandfather and his best friend as they served through the Civil War. This was a moving theater work and should be revived.

John's third play was Drummer Girl, about a young woman who escapes an abusive father and abusive marriage, disguises herself as a boy, and is conscripted into the army as a drummer during the Civil War.

Playing at the Hoogland along with The Baltimore Plot, the musical Million Dollar Quartet finishes its run this weekend – another telling of a major moment of music history. 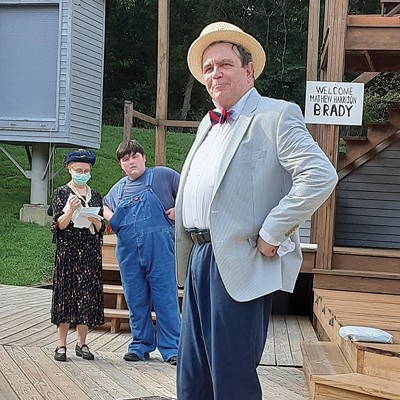 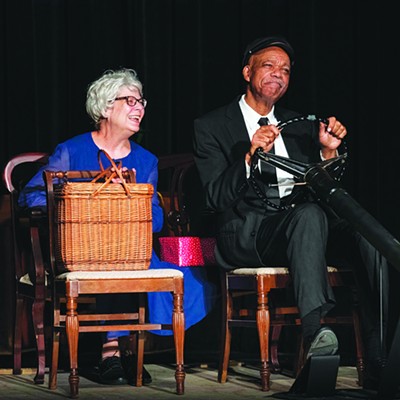