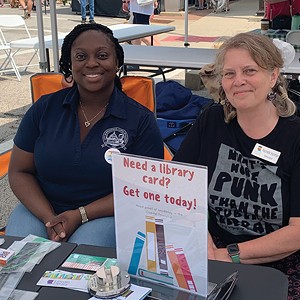 Rochelle Hartman, right, with Deanna Jones, promoting the library at a farmers market.

In spring of 2021, I made a commitment. In my postage stamp yard, I planted rhubarb, asparagus, raspberries and lily of the valley. Any gardener knows that these are plants which take time to establish and that bring reward for years to come. It was a way to renew my commitment to Springfield and Lincoln Library after a pretty challenging year.

COVID was certainly a major part of that challenge, but not unique. As I entered my second year as director, the struggles and frustrations of my first year continued and compounded. Chief among them was continued limited communication from Springfield City Hall and the overarching sense of being an outsider. Emails were sent without response and I was regularly left out of discussions about the library. Wi-Fi, being one of the few services a library could offer at that time, was shut off without consulting me during the early days of COVID, to discourage people from congregating outside. Portable toilets came to and went from the library property without a courtesy notice. One day, a security officer told me that camping spots were being marked off with tape by city maintenance workers outside the library. I did not necessarily disagree with why this was done (to create distance between outside sleepers), but I had no notice that it was going to happen and learned about it at the same time staff did.

There are numerous such examples, but the one that shook me was the disposition of a $1 million bequest that the library received in 2020. I assumed it would go to the Lincoln Library Foundation, as they are the body set up to handle bequests and memorials. Before I could meet with the foundation about it, I was asked to bring all the paperwork to the city's Office of Corporation Counsel. For two months, I regularly emailed the mayor and corporation counsel for updates on the status of this gift. At the end of the Nov. 10, 2020, city council meeting, the mayor proudly proclaimed that the city had received this generous gift and that former library director, Nancy Huntley, would chair a committee to determine how the money would be used. This was news to me, and, as I understand it, news to Huntley.

So it continued to go until a Jan. 21, 2022, Illinois Times article reported my termination as director of Lincoln Library, effective immediately. In the article, Mayor Langfelder responded that Hartman "did not have plans to stay long-term, which she openly shared and was looking to move elsewhere." It is true that I was actively looking for another library position in late 2021, during the time I was questioning how to unclog the communication pipe between the library and City Hall, and frankly, disappointed over being the most poorly compensated director of a comparably sized library by about $25,000.

During my search, I became a finalist for a wonderfully supported and well run municipal library in Iowa. The interview process, including a tour of all three lively locations and interviews with several groups of employees, inspired me and made me hopeful about the work I wanted to do at Lincoln Library. I was not selected to lead the Iowa library, but returned to Springfield and made a commitment to continue the work I'd started for at least another year. But, as happened with former Economic Development Director Val Yazell in March 2021, I was abruptly dismissed, without specific reason or any prior discussions about my performance. In two years I had not been evaluated or coached by the mayor. I did, however, regularly get positive feedback about the library's direction and my efforts from the library's board of directors.

What's done is done and I am looking ahead to how I can best contribute to making Springfield a better place to live. I do, however, still deeply care about the library, its staff, and the people it serves. Most public libraries are governed by boards. Boards and directors are partners who have a deep knowledge of what public libraries are and do. They are educated about laws particular to libraries. A director communicates with the board and the board evaluates and coaches the director. Lincoln Library does have a board of directors, but they are advisory only. When Springfield became a home rule community, the board lost its power to govern. The library board members are no less committed to the library than a board with full governance powers, but they do not have their hands on the wheel along with the director. For the health and sustainability of library service that Springfield needs and deserves, something needs to change. This could be either giving the board a seat at the table or the library breaking away from the city to become a self-governed district library. One of those is much easier than the other.

Unless I'm unable to find work that is beneficial to the community, I'll be here, milling around my tiny yard, looking for the first lily of the valley to poke through and hoping there's enough rhubarb and raspberries for a pie.

Until last week, Rochelle Hartman was director of Lincoln Library.Connect with her at LinkedIn https://bit.ly/3s1fJly or at rochelleready4work@gmail.com.

What can a closed library do? Lots.