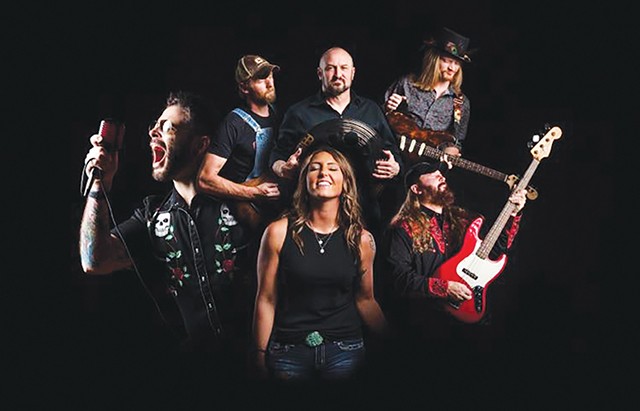 Named after a local waterway, this six-piece band follows the stream to the river and on to the sea, taking their amalgamated sound of integrated individuals to places unknown, but soon to be discovered. Started by lead singer Lance Stone in December 2013 as a cover band with an eventual goal of doing their own material, the group quickly morphed into a very popular local band, winning the 2014 BoS for New Band and knocking out several other popular categories since then.

The current lineup has been at it for awhile and includes Tyler Landess (lead guitar), Ryan King (lead guitar, banjo, mandolin), Steve Gragert (bass), Maddie Brown (acoustic guitar, lead vocals) and Robert Bryant (drums) along with Lance Stone still pushing out the vocals and leading the crowd into a frenzy of frenetic activity. Our readers think the world of this band, but so do lots of other folks as Lick Creek has opened for all kinds of major acts in big venues, played rocking festivals, gigged throughout the Midwest and won the Illinois regional NASH NEXT entertainment contest in 2017, then placed in the top 10 of national finalists.

They say they’ve “become a family” based on connections made from being a band, and much as a healthy family gathers strength from combining the best qualities of each member, this group does the same. Each player brings something different to the stage and that mixture gives the group a power that shows and shines in each performance and recorded song. Too Damn Country, their most recent release and first full-length collection of all Lick Creek songs, came out this past summer to good radio and online play. The CD is available at better record stores and most online digital platforms with special attention paid to Spotify plays. The self-penned songs demonstrate the band’s ability to create interesting modern pop country by basing tunes on real country styles while giving a nod to current tastes to develop a truly one-of-a-kind sound from the ‘Best” band doing originals in this town.