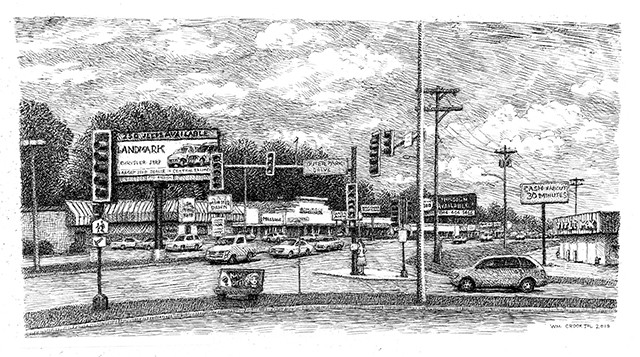 Artwork by William Crook
The intersection of MacArthur Boulevard and Outer Park Drive, as captured by William Crook, a longtime resident of the MacArthur area who is known for his pen-and-ink drawings of Springfield scenes.

BRINGING BACK MACARTHUR BOULEVARD
This is my neighborhood where I’ve lived most of my life from birth to age 70. In a perfect world, this intersection would be a public gathering space, a square, surrounded by markets and other small businesses. Right now, it’s only a connected expanse of roads and asphalt parking lots.

As a teenager this road was known as the strip, and in the 1960s, my friends and I drove up and down it between various drive-ins looking for love and adventure. It’s still a street I travel at some point almost every day.

Named after World War II General Douglas MacArthur, the street served as U. S. Route 66 from 1926-1930 and later as Illinois Route 4. The early 1960s saw the construction of Town and Country Shopping Center, Springfield’s first, as well as Town and Country Bank, of which my friend’s father was president. My junior high school, Benjamin Franklin Middle School, was a block to the right, bordered by corn fields, and Town and Country Bowling Lanes, where I purchased my first pack of cigarettes from a vending machine in the lobby, was across the street.

Today, prime commercial real estate has moved further to the city’s periphery, and the strip is occupied be a second wave of tenants including a title loan operation, a pawn shop and several rent-to-own furniture stores. However, a new supermarket has returned to the corner, where for 20 years there was none, so the strip continues its slow but dynamic evolution.

PELOSI SHOULD VISIT ENOS SCHOOL AGAIN
Nancy Pelosi will make her first visit to Springfield as Speaker of the U.S. House of Representatives next week, but it won’t be her first visit here.  Shortly after being elected Minority Leader of the U.S. House, Pelosi came to Springfield on August 26, 2003.  After hosting a fundraiser, Pelosi headed to Enos Elementary School to see firsthand some of the problems with the then-newly enacted No Child Left Behind Act and with the 1920s-era school building.

There she saw students sweltering in the August heat of classrooms without air-conditioning and a school labeled by the new law as failing, allowing parents to transfer their children elsewhere
It would be great if the Speaker would drive a few miles after her speech to see all the progress that’s been made at Enos in the last 16 years.  The old school building has been replaced by a new, fully air-conditioned one.  The No Child Left Behind Act has been superceded by the Every Student Succeeds Act, signed into law by President Barack Obama in December 2015.

While class won’t be in session yet, parents will be at the school registering their kids, along with staff, so Pelosi could talk to them and principal Claudia Johnson about how the new law is working. According to its report card on the State Board of Education’s website, Enos has made progress in academic success since 2015, when the new law Pelosi helped enact took effect.  In addition, the new building is as different from the one she saw in 2003 as night is to day.