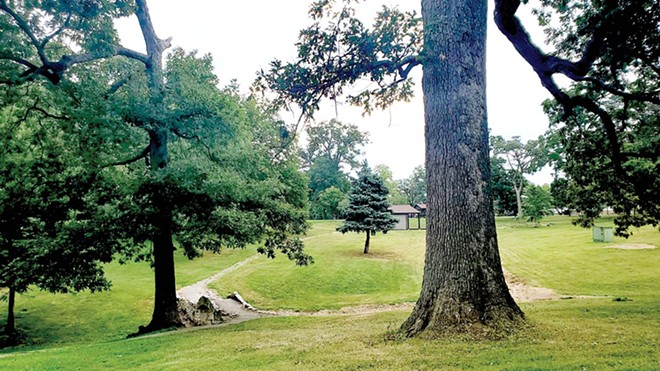 Photo by Rachel Otwell
The Springfield Park District is seeking community input on whether Douglas Park should be renamed to honor abolitionist Frederick Douglass instead of Stephen Douglas, whose statue is slated to be removed from the Illinois Capitol lawn due to his connections to slavery.

I am in favor of renaming Douglas Park as Douglass Park to honor Frederick Douglass, whose courageous voice helped to enlighten so many white people in the 19th century and beyond ("Douglas vs. Douglass: Park board wants community input on name change proposal," Sept. 3). This action would demonstrate a willingness to honor Douglass' story, while at the same time, honoring people of color in Springfield who long to have their story – of suffering racism's punishments over the centuries – acknowledged and given respect.

Furthermore, I hope to see a campaign of collecting money to have a statue, sculpture or some other notable item honoring Frederick Douglass, one that could be designed by an artist of color. To this end, I would contribute the first $100.

Thank you for helping us reshape the narrative that would best serve our community and our nation as we collectively find a way to move forward together.

Racism here, racism there, racism everywhere. Today, the left can demonstrate very few legitimate cases of racism. Most examples they point to, from swastikas and nooses found to Jussie Smollett's hate crime, turn out to be not racially motivated (Bubba Wallace) or are fabricated to justify their illusory narrative.

So, they have now turned to everyday, everywhere systematic racism in America – a perceived, imagined, invented racism known as "white privilege." Every white person is inevitably guilty of this by simply committing the original sin of being born Caucasian in America or Europe – a sin for which they can never atone for or be absolved of. How convenient.

Over the past 19 years, I have watched my country be changed by the monstrous betrayal of the 9/11 attacks. Our nation welcomed people from most countries, who wanted to learn, including those who eventually used the opportunity to hurt us.

Since then, we have become a set of armed camps. Over the years we have become more fearful, angrier and less open. And who can blame us? I can't help but notice how our fear, our radicalization and our fighting amongst ourselves makes us more like them. That is how they win.

Pledge nonviolence. That is how we win.