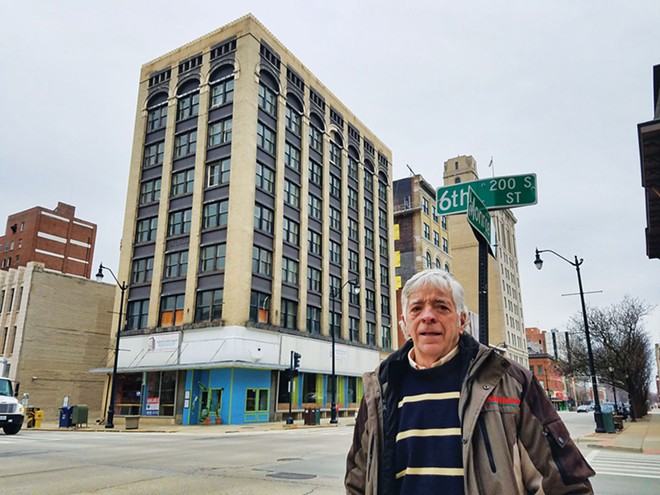 FILE PHOTO BY DAVE HINE
Rick Lawrence was the original developer for the Booth-Ferguson building, a project that began in 2012 and received nearly $1 million in TIF funding before stalling due to an expanded scope of work and financing difficulties. A New York real estate firm now owns the property but a recent request for an additional $3.15 million in TIF was turned down by the city council, which cited concerns regarding Lawrence’s ongoing involvement.

Having already sunk nearly a million dollars into an unfinished project, it would be wise to finish up the Booth-Ferguson building ("Getting soaked," Sept. 3). Also, the entity that bought the unfinished building likely can afford to complete the project without TIF, but TIF is needed to make up the difference between non-union labor and the cost of local, union labor. I'm not knocking union labor, because I want everyone to make a good living, but the money has to come from somewhere.

The only thing the new owners were asking for on this building was the equivalent of a tax abatement. The money was coming from the projected increase in property taxes the improved building would provide. And to be good community stewards, this unrelated company was willing to pick up the debts that are owed by previous developer Rick Lawrence.

But we'd rather a personal vendetta against Lawrence stop the entire project, because we'd rather go unpaid than allow someone to pay those debts on his behalf and "let him off the hook." It's sad that it works out like this in Springfield so often, but personal vendettas in this town run the show.

In 1991, I lived in the state of Louisiana. There was a race for governor where David Duke (Klansman) was the Republican candidate, and Edwin Edwards (labeled a crook) was the Democratic candidate. There were bumper stickers: "Vote for the Crook. It's Important," and "Vote for the Lizard, not the Wizard."

As Americans, we really have no choice anymore, and there is a need for a viable third party. I also believe that this is why we have such low voter turnout. We have to make it easier for third-party candidates. During this pandemic, many states made it easier for those who wanted to seek an office as a third-party candidate, needing only 10% of the signatures normally required to get on the ballot here in Illinois. Some took advantage of this. However, as a third-party candidate, you are hardly given any recognition, and if you are running for president, you are rarely allowed to join in the national debates. This is not fair. The system needs to change.

Now in the upcoming election, we are faced with the same two parties, each promising to do better for our nation. In order to really make our vote count, we have to vote for the lesser of two evils. Why? Because there is no other viable choice, and we need our vote to count. That is what I did in Louisiana in 1991. By the way, I'm an African American male. Can you guess who I voted for?

In the Sept. 3 "Editor's note," you strive to make the point that because Springfield, Illinois, and Kenosha, Wisconsin, are similar in size, "it's easy to imagine us in Kenosha's place." Really? I found it troubling and irresponsible of you to suggest that Kenosha might be coming to Springfield. Are you inviting trouble? You named the Springfield police, Springfield Black Lives Matter movement, violent looters, nonviolent protesters and (not to be left out) President Donald Trump to be likely to reprise Kenosha. And, so close to Nov. 3. Your words do matter and can be an unintended harbinger of societal disorder.