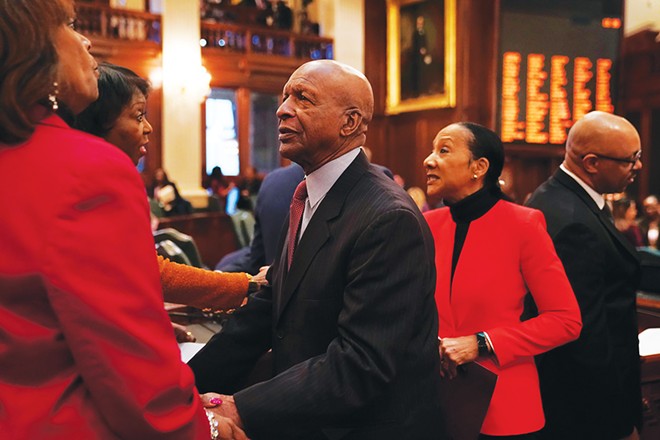 Photo by E. Jason Wambsgans / Chicago Tribune
Shortly after he was first elected, Jesse White hired Candace Wanzo (not pictured) as a private secretary, even though she had pleaded guilty eight years earlier to embezzling more than $233,000 from Southern Illinois University and failed to repay the money. Three years ago, the inspector general’s office discovered numerous improprieties with her office. Despite claiming to be “highly offended by the alleged actions of Ms. Wanzo,” the secretary of state has fought to keep secret files describing Wanzo’s suspected misconduct.

Yes, according to Jesse White's spokesman, our secretary of state was highly offended that Candace Wanzo allegedly stole over $340,000 from his office ("Six figures of trouble," April 30). Well, Mr. White, I am sure the Illinois taxpayers are also highly offended that you gave Candace Wanzo a job after she also stole $233,000 from Southern Illinois University Edwardsville. We might be offended that you also hired her daughter for a job in the same office. We may also be offended that Candace Wanzo was put on administrative leave and sent home for a year while collecting her $87,600 salary. By the way, she was allowed to resign, gave a 28-day notice and yes, she collected another month's pay. Mr. White, I know how you feel because I am also starting to get highly offended.

With the help of Attorney General Lisa Madigan and later, Attorney General Kwame Raoul, you did a very good job of keeping all this a secret. It took three years after the Freedom of Information Act requests were filed to finally get the truth.

Now that we know what went on in your office, we read that you are highly offended. Well, Mr. White, I hope the people in Illinois are highly offended enough to quit supporting dishonest politicians and political hacks. The state of Illinois seems to have an abundance of both.

The story of countless lynchings and brutal massacres of Blacks, down through the history of this country, has never been included in American history books and classes.  This fact, in and of itself, is indicative of who has had control of the textbook content, the printing press, the publishing companies and the education curriculum.  Get a handle on this and you will have a better understanding of what the term "systematic racism" actually encompasses.

Add to that the fact that each time Blacks took a step forward in wealth, prosperity and economic stability (such as with Black Wall Street in the early part of the 20th century), whites rose up to knock them two steps back (such as with the brutal annihilation of Black Wall Street in 1921). You now have an even broader and clearer picture of the toll systematic racism has taken on Black lives in this country, down through many generations.

A man of faith, Rev. Martin Woulfe, was extremely angry that the president wanted houses of worship to be allowed to reopen – to be treated the same as large businesses ("Too soon to reopen," June 4). I could not understand how a reverend could be this angry over freedom of religion. At first, I thought he was under the impression churches were required to reopen. Each church can decide for themselves to reopen or not. I know of no one who doesn't want the opportunity to decide for themselves. My next thought was he just wanted the opportunity to criticize President Donald Trump.