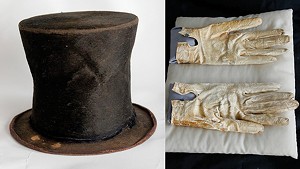 Tremendous article in the May 17 edition of Illinois Times titled “Selling Lincoln.” I guess you have seen that the original State Journal-Register piece first announcing the potential auction of various artifacts from the Taper Collection has absolutely gone national now, with reprints in the LA Times, The Washington Post, and I think New York Times, as well as corroborating reportage in the Chicago Tribune.

None of these media have done anything other than reprint a kind of infomercial serving to solicit sympathetic funding to help the foundation cover the remaining outstanding debt, sans accountability. Your feature is the first serious investigative journalistic in-depth coverage of the larger historical framework of this hometown scandal, which frankly has been portrayed by the larger outlets as not much more than a somewhat amusing consequence of Illinois’ budget woes.

Thank you for this fascinating story, for your focus on key players involved in these developments, and for what I consider your real concern for the well-being of ALPLM and its ethical future policy.

You raised some interesting points regarding the acquisition of the Taper Collection and loan agreement with Wintrust (“Big money,” Illinois Times, May 24). You appear to be implying, though, that there’s been some sort of a failure of the presidential library foundation to properly manage their finances. I’m not sure you meant to imply this. Carla Knorowski’s compensation of $256,000, given her resume and how much she has raised since taking the position, is not unusual. If you have a chance, check out Knorowski’s background. She’s a very solid organizational fundraising leader.

Did you see the Chicago Tribune editorial about putting a Lincoln site in Chicago, perhaps in conjunction with a Hamilton museum? Do you think you could support this effort? This would be such a very, very wonderful, moving and important museum. Think of what this state would have: Lincoln, Hamilton and Obama, all in Chicago. And that would be a huge draw for people to then go to Springfield. It would be wonderful to have a satellite museum in Chicago.

Interested individuals seeking an exciting and rewarding volunteer opportunity can find one on Wednesday, June 6, at 5:30 p.m. at the Lincoln Home Conference Center, located at 406 S. Eighth St. in Springfield.

During this orientation, prospects will learn about the various ways they can become a VIP or “Volunteers in Parks.” These might include wearing period clothes as a living historian, and, during peak visitation, presenting historical programs for visitors from all around the world.

Other possible volunteer opportunities include giving fascinating Illinois history talks to passengers on board an Amtrak train to Chicago and back to Springfield as a part of the “Trails and Rails” program. Another way to volunteer is by leading tours of 15 guests through the only home Abraham Lincoln ever owned as a tour docent.

The benefits to volunteering with the Lincoln Home are plentiful, too. Not only can you meet people from around the world, but you can also receive a free national park pass after completing 250 hours of service within a year. To RSVP for the Wednesday, June 6, VIP event, please contact Jared Kaylor at 391-3236 or jared_kaylor@partner.nps.gov.