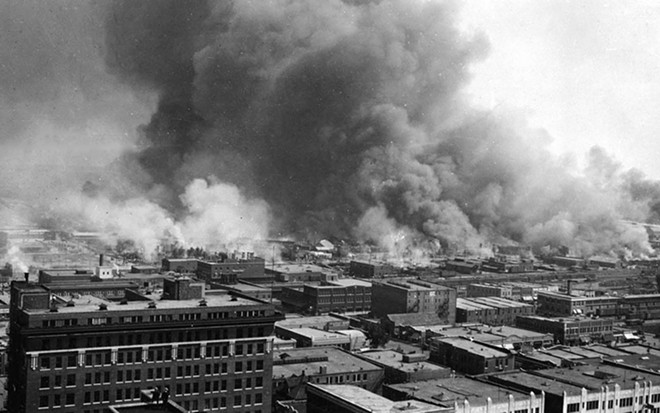 In 1921, the Greenwood District in Tulsa, Oklahoma, was the wealthiest Black community in the United States, known as Black Wall Street. Over Memorial Day weekend, mobs of white residents attacked Black residents and businesses, destroying more than 35 square blocks of the district in the single worst incident of racial violence in American history.

The most frustrating and prohibitive factor in the unending battle for equality in our nation is the people who allow their thinking to flow as shallow as necessary to remain comfortable in their ignorance. This helps explain why, for the most part, the citizens of our nation remain unaware of the following piece of our nation's history.

I was born less than 25 years after the ugliest, most egregious crime ever perpetrated against Black enterprise in the history of America. June 1 will mark the 100th anniversary of the 1921 annihilation of Greenwood, the community in Tulsa, Oklahoma, known as Black Wall Street.

Though the lives of hundreds of black citizens were lost during that night of terror, and more than 1,100 homes, 85 businesses and many churches and schools destroyed, leaving thousands of people displaced, no insurance claim was ever paid out for the destruction and no participant in that heinous act of terrorism was ever prosecuted and/or imprisoned.

Why is it that when atrocities such as the one that occurred in Tulsa in 1921 (perpetrated on American soil by American citizens) are finally acknowledged, they're referred to as riots, and not the murderous massacres that they actually were? How long does it take for the economic and emotional scars of an event such as that to heal, if ever they can be healed? There certainly is no way to measure or restore the economic loss that this event caused to the generations of Black Americans who followed.

How does one remove the sense of anger, depression and mourning that linger 100 years later, over the loss of people and property, taken away with total and absolute impunity to those responsible? And how does the conscience of a nation reconcile an event in which the very worst of its character was demonstrated?

Our nation was founded on the principle of no taxation without representation, hence the Boston Tea Party. Yet that fundamental principle is violated by our Capital Township government.  Senator Doris Turner's bill SB 826 would right this fundamental wrong by giving Capital Township voters the same right to elect their representatives as every other township resident of our state does.

Capital Township, with roughly the same borders as the city of Springfield, is governed by a five-person board. Four of the five board members are elected by the township's voters. But the fifth person is elected by the voters of all 26 Sangamon County townships. The countywide-elected County Treasurer serves ex officio as township supervisor and chair the board. No one would stand for a system where the voters of our entire county picked the mayor of Springfield.

If challenged in court, this system would probably be found to be unconstitutional for violating fundamental principles of democratic government. Kudos to Senator Turner for fighting to give Springfield citizens the right George Washington and our Revolutionary War heroes fought for and won for our original 13 colonies.

A story in last week's edition about nuclear power incorrectly stated that nuclear plants in Ohio tied to an alleged bribery scheme are owned by an Exelon subsidiary. The plants are owned by a different company.