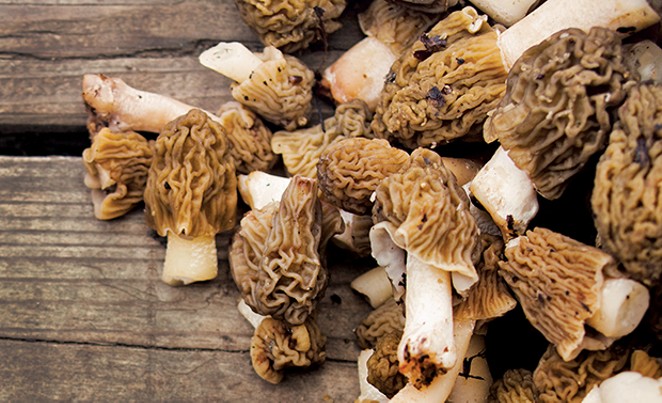 Photo istockphoto.com
Morels, true or false? See below for more on Verpa bohemica.

Thanks to the several sharp-eyed readers who called in and told us those are “not morels” in the photo we used to illustrate Ashley Meyer’s food column last week on “Morel mushrooms.” Turns out that what our photo service offered when we did a search for morels is a photo of one of several species of fungus known informally as “false morels.” Our sources tell us the mushrooms in the photo are Verpa mushrooms (Verpa bohemica), commonly found in the Pacific Northwest. They’re edible – not poisonous as some of you told us – and safe to serve in restaurants if they come from a reliable purveyor. Verpas can be distinguished from true morels by the way they wear their caps. The Verpa stem goes up into a cap that hangs completely free from the stem, while with true morels the stem stops where the attached cap starts. – Editor

This letter is in response to the article titled “Marching with the kids for gun law reform,” by Walt Zyznieuski, published in Illinois Times on April 5. It is obvious the writer got a big warm fuzzy from attending a protest march with a group of poorly educated but thoroughly indoctrinated social justice warriors down for the cause. It seems all of this nonsensical virtue signaling has caused the writer to lose touch with reality.

First, we are told that the “student survivors of the Marjory Stoneman Douglas High School shooting massacre had to put this event together to have their voices heard on gun violence.” Nothing could be further from the truth. It is widely known that this little melodrama was organized and paid for by Nanny Bloomberg’s bored housewives, George Soros’ MoveOn.org, Planned Parenthood and the usual leftist-celebrity axis. No one can be so naive as to honestly believe otherwise.

So who are the faces behind this “grassroots” charade? The March for Our Lives Action Fund is organized as a Delaware not-for-profit corporation, with its headquarters in Encino, California. Deena Katz, with the Women’s March Los Angeles Foundation and producer for Bill Maher and “Dancing with the Stars,” is a fund director and obtained the permit for the D.C. protest march. Other fund directors are professional activists from UCLA, Chicago, Madison and Washington, D.C. No car wash or bake sale money was used to put on this performance.

But what is the real message hidden within this publicity stunt with the students as props? Is it school safety or the need for more background checks? Of course not. Ask yourself why law-abiding gun owners and the NRA, who had nothing even remotely to do with the MSDHS shooting, are the targets of the protesters. Ask yourself why the FBI, the school district’s superintendent, the local police and some cowardly sheriff’s deputies, all of whom were in a position to prevent this shooting and did nothing, are not the objects of the protesters. Ask yourself, “What law do these people propose that would have prevented this shooting?”

The truth is, this entire performance is about only one thing. It is an attempt to destroy the Second Amendment. Your writer says the “students were educated, energetic and savvy on the issue.” It seems to me these students are living proof of a failed, dumbed-down public education system that preaches anti-gun dogma rather than teaching American history and why our founders saw the need for a Bill of Rights. I suppose these newly recruited social justice warriors may be forgiven for being merely uninformed foot soldiers in this war of attrition on the Second Amendment, but Mr. Zyznieuski should certainly know better.