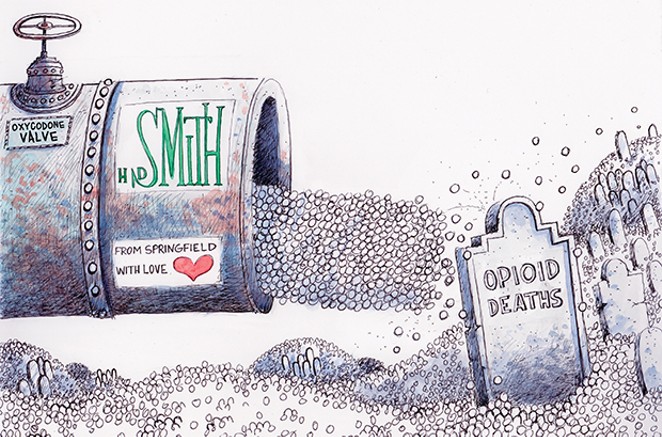 I just finished reading “The Pill Pipeline” (Bruce Rushton, Illinois Times, March 1). One piece of information that jumped out at me was that last year McKesson Corp. paid a $150 million fine for not reporting suspicious opioid activity. That sounded very punitive and draconian until I read on that they had revenues of $200 billion last year. The punitive and draconian fine imposed on the company represented 0.075 percent of their income.

According to the Census Bureau, the median household income in Sangamon County is $56,742. If we were guilty of the same thing, we would get fined $42.56.

Someone or some people at McKesson made a conscious decision to prey on people’s pain and weakness to increase their bottom line. Until individuals are held responsible and face the consequences for this the problem will continue. Unfortunately, all we can hope for from our local congressional representatives to fix this is for them to accept contributions from the industry and then offer their heartfelt thoughts and prayers.

The Republican Primary race for governor is certainly getting hot in Illinois. Despicable campaign ads created by Bruce Rauner against Jeanne Ives are not just nasty, but outright lies.

The campaign lies filling mailboxes show the depths he is willing to go to defeat Jeanne Ives, a West Point graduate, Army veteran, mother of five, and an amazing woman of integrity who has been endorsed by all the pro-family, pro-life groups and Taxpayers United of America.

It is easy to see how Rauner earned the dubious distinction of “Worst Republican Governor” from National Review magazine a few months ago.

In the March 1 issue of Illinois Times, Cinda Klickna condemns the arming of some teachers in schools. She seems to think that a person can’t love students, teach and be proficient with firearms at the same time.

There are teachers that shoot skeet or trap, hunt or target shoot and are proficient in the use of firearms.

Others would require training. While no teacher would be required to be armed, those that are proficient and are willing to participate could provide students with additional measures of protection. It would be more beneficial to students to provide armed resistance to a shooter than to huddle unprotected in a classroom hoping that that he won’t enter. The obvious additional benefit of arming some teachers is the deterrent effect it would have on the shooter if he knew that he wouldn’t be the only person in the school with a gun.

Cinda expresses concern about the cost of guns and training and indicates that there isn’t enough funding now for supplies and personnel. However, in the next paragraph she points out the need for more counselors and at least one social worker and a psychologist on staff. What will the students have to give up to support this additional cadre with their associated salaries and the increase in unfunded pension debt? The cost of arming a few teachers would obviously be much less than adding staff positions.