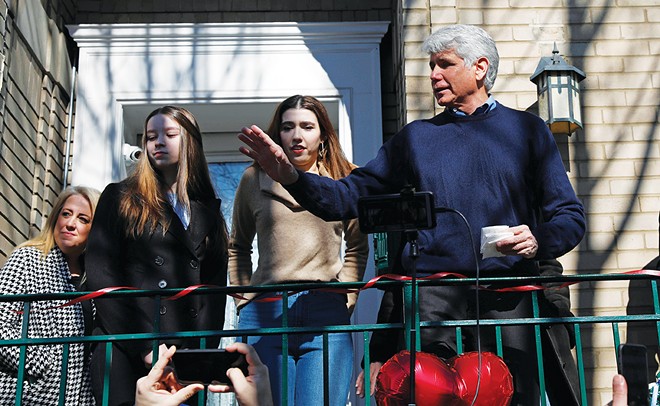 Photo by Jose Osorio/Chicago Tribune/TNS
Former Illinois Gov. Rod Blagojevich speaks to the media outside his home in Chicago.


FRIENDLY, BUT NO AGREEMENT


I read your recent Cap City article ("Shocking," Feb. 20) about a complaint by assistant U.S. attorney Tim Bass about others in the U.S. Attorney's Office, in the course of the corruption prosecution of former Representative Aaron Schock. I have, as the U.S. Attorney from 2010 through 2016, a different perspective.

Until 2016, when I retired, Bass was always well-supported by office leaders, including the U.S. attorney, the first assistant and the Springfield criminal chief. Through hard work by Bass, together with substantial office and investigative support, the office was able to bring a series of significant corruption prosecutions to completion and to present a grand jury with a proposed indictment against Schock; the grand jury approved that indictment.


I asked Bass to join the district's leadership team; he joined and assisted. The leadership team was working together when I left, and I'm sorry to learn that this did not continue to everyone's satisfaction.


The leadership team, including Bass, twice hosted discussions with Schock's defense team for Bass to lay out the evidence against Schock. These discussions were friendly, but friendliness does not imply any agreement, and there was no agreement between the prosecution team and the defense team.


Who managed the office? I did. We benefitted from a strong leadership team, hard-working employees, skilled investigative agencies and many others. The office did a lot of good work, without fear or favor – and without a basis for complaint. That's my perspective.


In the book Golden: The Story of How Rod Blagojevich Talked Himself out of the Governors Office and Into Prison by Jeff Coen and John Chase, one important element was left out.


After Rod and his merry band of criminals took the reins of government, a purge of state employees, handled amateurishly and brutishly, took place. Instead of removing political operatives and hacks of the other party as had been done under the patronage system of the past, career administrators, possessing historicity and continuity from administration to administration were removed, often with a letter dismissing them left on their desk.


Years later, the courts reversed many of these illegal and ill-thought-out terminations but the careers of professional and hard-working civil servants, believing they were protected by a statutory merit system, were destroyed.


Some were on the cusp of retirement with mortgages to pay and children in college, and then they found themselves in the unemployment line. The saddest of all were employees who had mental breakdowns and/or committed suicide.


Trump figures he will never win Illinois anyway, so it doesn't matter what Illinoisans think. But this will infuriate all Illinoisans as no one can imagine.


As to the president, holding my nose, I will vote for him again over a Democratic proto-communist, but it will be full well knowing both his vision and his good judgment are clouded. God save this country.