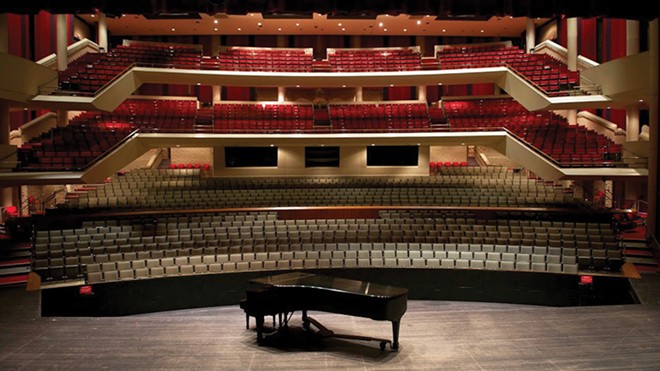 On Feb. 21, 1981, Sangamon Auditorium was sold out for its inaugural public offering starring Hal Holbrook in "Mark Twain, Tonight!"

After years of political maneuvering to seek funding, as well as public doubt and institutional skepticism, Springfield's wish for a formidable performing arts facility became reality, to be housed at the recently birthed Sangamon State University. Finally, a home for the symphony, the ballet, a class venue for community performing arts and for public assembly endeavors. All would contribute to an arts collaboration in Lincoln's hometown. It was a noble challenge led by local community leaders, a stellar political achievement of funding, and eventually, it would be a bold regional influence in the competitive cultural and entertainment arena.

As the first director of Sangamon Auditorium, I arrived with my wife, Ronée, in Springfield in 1980 to open the new Public Affairs Center which housed the 2,000-seat venue. I still say it is one of the most enduring and workable low-bid projects the State of Illinois has seen: a formidable array of architects, engineers, contractors, outfitters and workers collaborated to produce a true gem for central Illinois.

I would like to acknowledge the many players in the daily operation in the ensuing years to include the hundreds of volunteer ushers, stagehands, full and part-time staff and the many donors so seriously needed in sustaining a viable performance facility such as this.

Among the thousands of public and private performances on the Sangamon Auditorium stage before I retired in 2004, Hal Holbrook returned four more times to share the wit and wisdom of Mark Twain. And on behalf of all the performers especially, I want to thank the many varied audiences for giving them the applause they so artfully deserve.

SLAVERY NOT UNIQUE TO SOUTH

Your recent story on teaching black history had a glaring historical error that was completely overlooked ("Teaching Black history better," Feb. 4). The article rightly criticized a McGraw-Hill textbook for referring to imported African slaves as "workers," yet there was another inaccuracy in the textbook that went unnoticed.

The textbook said that the slave trade "brought millions of workers from Africa to the southern United States." This is false. According to Dr. Henry Louis Gates, director of the Hutchins Center for African and African American Research at Harvard University, there were approximately 12.5 million African slaves brought to the Americas between 1525 and 1865. Of those, only 388,000 were brought directly to the United States and another 60,000 came here after first arriving in the Caribbean. So, the total number of African slaves brought into this country was around 450,000. Brazil, by itself, imported 10 times that number. Haiti, which is one-third the size of South Carolina, received almost 800,000. Also, many of these slaves were brought to the North. New York State, for example, did not completely ban slavery until 1827.

Yes, we need to do a better job teaching Black history. I would also say we need to do a better job teaching all of history, but that's a discussion for another day. I am also not trying to minimize slavery or make excuses for it. It was an evil institution that should never have stained our history. But if you are going to teach about slavery, you must not treat it as though it were an institution unique to the American South. It wasn't, not by a longshot.