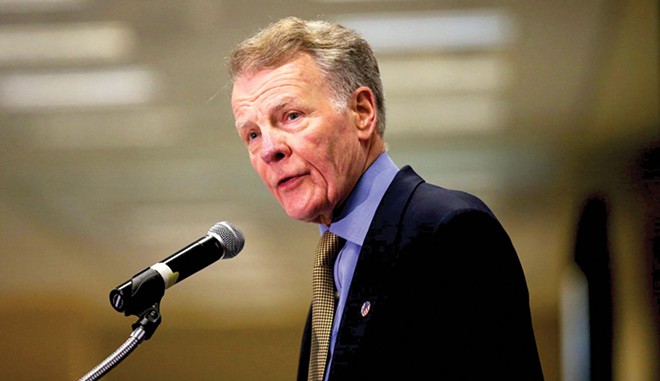 MISCONDUCT ABOUNDS
Recently, there has been a parade of Springfield-area commenters deriding Speaker Michael Madigan for allegations against his Illinois House members relating to ethics and utility dealings. There are two glaring problems that undermine their credibility on the issue: 1) Locally seated courts' rejection of the State Officials and Employees Ethics Act legislation, passed by Madigan in 2003 and 2) Costly city utility misconduct perpetrated by unqualified and conflicted City of Springfield managers and officials.

As recently as 2019, courts in Sangamon County ruled against three days of trial evidence expert witness testimony in favor of expectations of untethered loyalty to rogue political appointee managers. What should have been a legal, factual and ethical no-brainer under the Ethics Act proved beyond the capacity of the judiciary seated in Sangamon County.

Regarding the debilitating influence of utility power, the City of Springfield could be a poster child for such unethical dysfunction. While the list of CWLP mismanagement and improprieties is long-storied, locals tolerate failed oversight of their utility. For example, when utility land use violations are brought forth by homeowners, the deciding factor depends on who the homeowner and violator happen to be, rather than the underlying harm caused by such violations. In fact, the city and its enabled utility retaliate against legitimate complainants rather than address the violations at hand, allowing the violations to continue for the favored violator.

The city's wrongdoing reaches so high that the city's inspector general even admits he is at a loss on how to deal with the misconduct. Understandably, it may be difficult to commit to service with honor and integrity in Springfield and Sangamon County in the face of traditional "as long as I get mine" indifference. Thus, Madigan's lead should be followed by the capital city's municipal and county governments.

For the sake of the people of Springfield and Sangamon County, it is time for politicians and public officials to stand up for what's right. Embrace ethics laws, rules and regulations and commit to work on a comprehensive plan with real accountability. Resist public corruption and pervasive misconduct once and for all.

And to the many other city and county enablers of misconduct, please step aside and let existing laws, rules and regulations guide the way to reform.


THANK YOU RABBI MARKS
I enjoyed Rachel Otwell's piece about Rabbi Arthur Stern ("Road to recovery leads to becoming a rabbi," Aug. 27) and I look forward to welcoming him into the community. The departure of Rabbi Barry Marks is difficult to come to grips with. His leadership and presence in the Springfield community will be missed, and his kind counsel will be remembered by many for years to come.

REMEMBERING CHADWICK BOSEMAN
At age 46, Chadwick Boseman gave this world so much. While he was diagnosed with Stage 3 colon cancer four years ago, he was surely suffering and fighting it for much longer. In that time, he influenced our culture and society in ways that will be felt for generations. Imagine what he could have done with another 46 years in this world.

Chadwick Boseman was a kind soul who brought so much joy to his friends and family and was gracious enough to do the same for us all. He knew his time was limited, so he became the best person he wanted to be. He became a person people could aspire to be. He suffered and persevered while plagued with colon cancer. He exhausted his talents until his last breath. He showed us what true strength was. He lived in power, and now he gets to rest in peace.